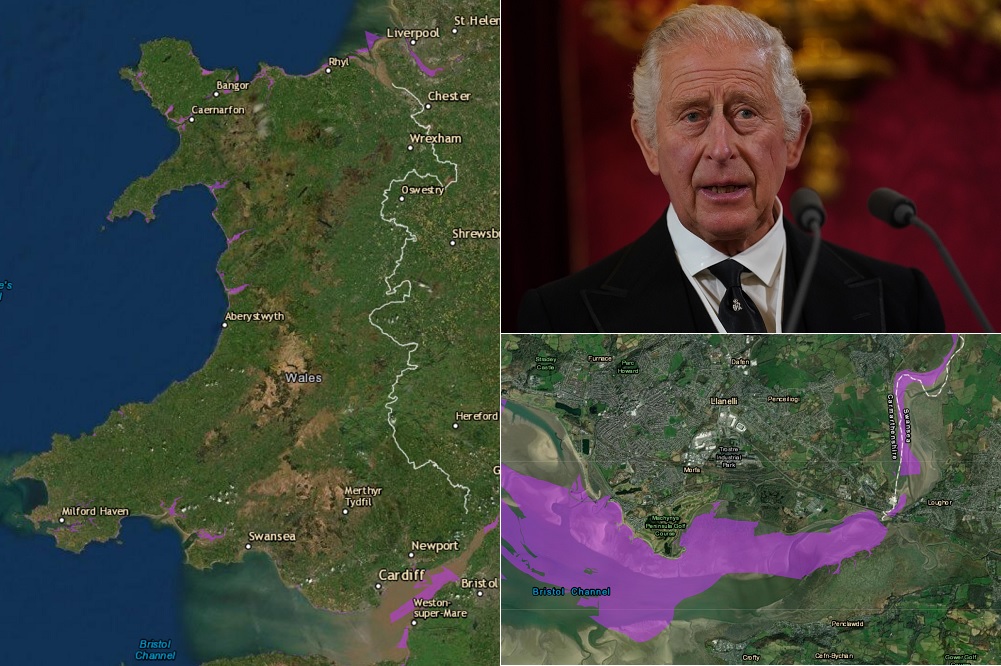 From the coasts of Llandudno to Portmeirion, from Llangrannog to Llanelli, the lion’s share of the coast of Wales belongs to the king.

The public can now use an interactive map to see which beaches and estuaries are in possession of the monarchy.

In total, around 65% of the Welsh foreshore and riverbed is owned by the Crown Estate.

The map, however, does not show that the Crown Domain includes the seabed out to 12 nautical miles.

The Crown Estate is a collection of land and property in the United Kingdom owned by the British monarch as a body corporate. The valuation of the Crown Estate maritime portfolio in Wales has fallen from £49.2m in 2020 to £549.1m last year.

Powers over the Crown Estate in Wales are currently held at Westminster, with 25% of the revenue going to the Royal Family and the rest to the UK Treasury.

As well as the Crown Estate, the Duchy of Cornwall – which has now passed to the Prince of Wales – owns 49 acres of land in the Vale of Glamorgan and is also believed to own the 192-acre estate of Llwynywermod, Myddfai, near the Brecon Beacons, including two gites.

The Crown Estate and Duchy of Lancaster, which acts as a trust for the Queen, also owns 1,232 plots in Wales. This includes land as varied as Ogmore Castle and Tintern Abbey, as well as the 3,000-acre Plynlimon Estate in Mid Wales and the 450-acre Wildlife and Wetlands Center near Llanelli .

There have been calls for the Crown Estate to be transferred to Wales, as it has in Scotland. So far, more than 11,000 people have signed a petition calling for the move.

The Welsh Government backed the calls, with Climate Change Minister Julie James saying it was ‘outrageous that this is devolved to Scotland and not us’.

“However, in the meantime, and in the absence of a government at UK level which seems likely to do so for the foreseeable future, we have also sought to develop a very good relationship with the Crown Estates.

“So both myself and [Deputy Climate Change Minister] Lee Waters met with the Crown Estates to discuss the different potentials in the Celtic Sea and around the Welsh coast, where Crown Estate lands are involved, and also, indeed, on land as well. Thus, Crown Estates also owns land in Wales.

“We have also engaged with them to make sure that we have as much community ownership, community benefit component in the auctions that they run, although the money goes back, as you say, to the treasury.

“So far we’ve had a committed and reasonable welcome from them, although that’s not a substitute, I’m all for it, that it’s devolved to us.”

In July, Plaid Cymru renewed calls for the divestment of the Crown Estate, following news that the UK Treasury could earn £43bn in rent from proposed wind farms off the Welsh coast.

The Crown Estate today announced plans to generate 4GW of electricity from floating wind farms off the coast of Wales, with tenders to begin in 2023.

Research commissioned by the Crown Estate also suggests that a further 20GW of floating offshore wind capacity could be established in the Celtic Sea by 2045.

2022-09-19
Previous Post: Egypt reopens ancient site of Virgin Mary’s Tree after months-long renovation
Next Post: Letters to the Editor: “King Charles will reign some time. After the Queen, can he preserve the Commonwealth? Plus more letters to the editor for September 19