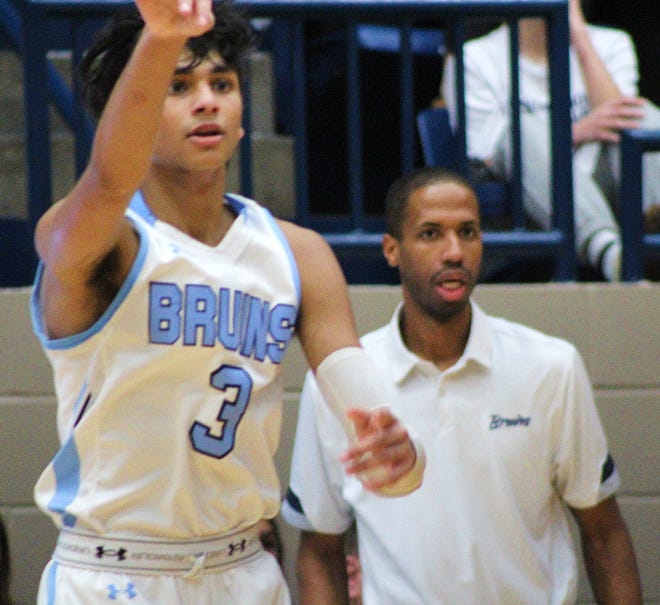 Even without its top scorer unavailable, the Bartlesville High School boys’ basketball program still had a light-hearted June of team camp and summer league competition.

“We finished the last week of June at Oral Roberts,” noted ninth-year Bruins head coach Clent Stewart. “We had a very good summer.

Additionally, Stewart put together a second Bruin roster, comprised of both junior and college varsity players—to play in the Nowata summer league and Verdigris team camp.

“We could see where we are at this time of year,” said Stewart, who is coming off one of his best seasons (12-11) with the Bruins.

The June activities of this year proved to be particularly necessary – Stewart got two graduates and some primary rotation talent and also lost another potential future rookie to transfer.

With team manager David Castillo out of pocket in June, primarily due to his attendance at the USA Basketball U17 men’s team camp and tryouts. Castillo — who averaged 25 points per game his first two seasons (freshman and sophomore) with Bruin University — also earned a spot on the 12-man national team.

Castillo is currently with Team USA competing in Spain in the FIBA ​​World Cup basketball tournament.

Castillo’s absence from Bruin’s efforts in June could have been an advantage in one aspect — it allowed Stewart to focus more on the strengths and needs of his new college impact players.

Stewart came out of June impressed with the progress of Aadhi Ayyappan, on track to be a three-year college starter and a four-year college contributor.

“I think it’s been a great summer for Aadhi stepping up and being aggressive,” Stewart said. “He led us all summer and I hope he continues that aggressiveness next winter.”

“He played really strong when it came to closing gaps and making plays,” Stewart said. “When he was playing his best when he was aggressive.”

The 6-foot-4 fighter used his vertical game to make a big impact in June.

“His ability to score around the rim, his rebounds will be a big help to us,” Stewart said.

Other varsity-tested assets include brawny forward Cooper Wood, who saw plenty of playing time as a rookie (2020-21) but saw fewer minutes last year due to a expanded forward rotation, made a strong bid in June to be a top contributor next winter.

“He took a step forward this summer,” Stewart said.

Duong shot the ball well from the outside and Rogers “is so athletic – he’s terribly athletic,” Stewart said.

Rogers played at Oklahoma State’s camp which amazed everyone in the gym, Stewart explained, adding, “People next winter will appreciate seeing his athletic ability.”

Stewart regretted not being able to see more Mike Smith, a new Bruins college player who is a transfer from Booker T. Washington.

“He could be a big chunk for us,” Stewart said. “What’s most impressive is his ability to drive to the basketball and finish on the edge and he’s playing the right way. He’s a team guy. …. He’s more of a guard, but I think we can take advantage of his inside goal.

He should do some of the things senior Kent Girard did last year for the Bruins, as well as fellow graduate starter Jordan Carter, Stewart said.

Then, the Bruins must organize two summer camps, from Monday to Wednesday. Teaching and eye competition for students in grades three through six from 9:00 a.m. to 11:00 a.m. each of these days. The session for grades seven to ninth will take place from 1 to 4 p.m. The cost is $50 for younger children and $60 for older children. Camps will be held at the Bruin Fieldhouse.