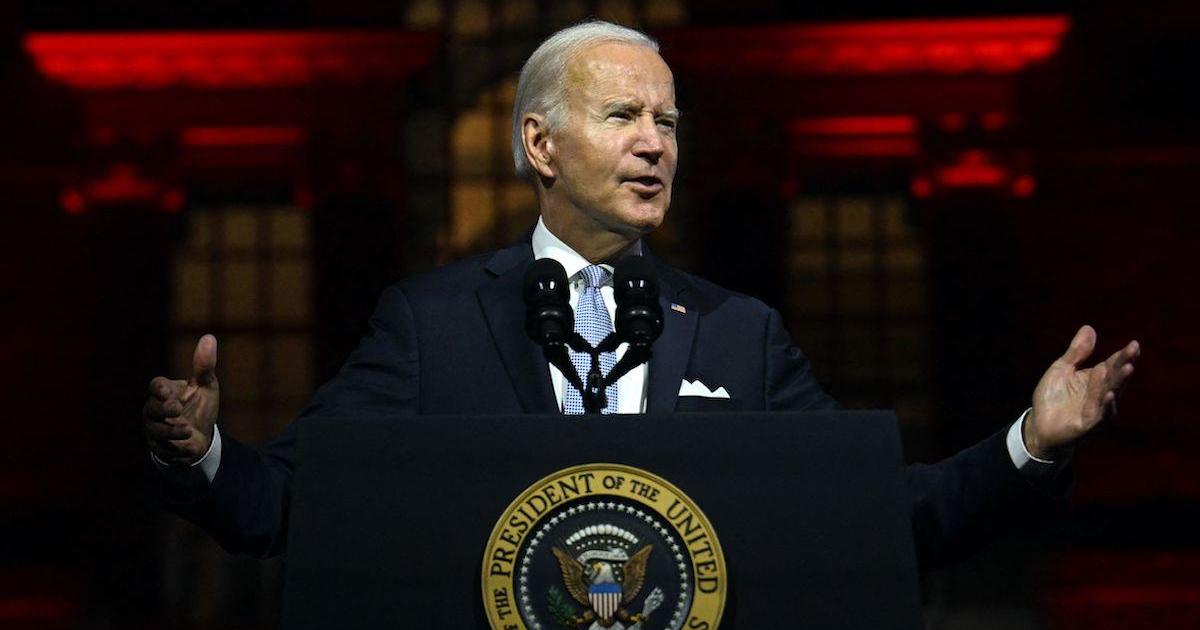 In the spring of 2019, Joe Biden officially launched his presidential bid in Philadelphia, telling his supporters that the number one reason he was running was to “restore the soul of the nation”.

Back in Philadelphia Thursday night, just two and a half miles from where he stood in 2019, he discussed what the White House calls “the ongoing battle for the soul of the nation” on the eve of the traditional midterm campaign season.

But, he said, much of the Republican Party is “bullied” by former President Trump and his supporters.

“I believe it is my duty to speak the truth with you, however difficult it is, however painful it is,” he said. “And here is, in my opinion, what is true: the MAGA Republicans do not respect the Constitution. They don’t believe in the rule of law. They do not recognize the will of the people. They refused to recognize a free election.

The address comes as Trump faces a long and publicized legal battle on multiple fronts and dozens of Trump-backed candidates who share his false belief that the 2020 presidential election was stolen are seeking election in battleground states where they may one day control the election levers.

“As president, I will fight for democracy with every fiber of my being, and I ask all Americans to join me,” Biden added. He then called on Americans to vote in the next election.

The aides, who privately admit that more headlines about the former president help improve the current president’s political standing, have publicly insisted the address had nothing to do with Trump.

“This is not a speech about the former president. This is a speech about American democracy,” a senior administration official said Thursday morning during a preview of the speech to reporters.

“It’s not in response to news of the day. It’s in response to what he sees as a time in this country…where he feels it’s his responsibility to bring this issue to the American people. fundamental about what kind of a nation we are going to be, and what we need to do to deal with the threat to our democracy that he says exists right now,” added the official, who spoke on condition of anonymity. media outlets to share speech details in advance.

The president delivered the speech outside Independence Hall to an invited audience of a few hundred people.

Republicans, eager to exploit the president’s low approval ratings and keep the focus on him, argue that Mr Biden is reneging on his campaign promises to unite the country and not speak ill of opponents. In a speech Thursday afternoon, House Minority Leader Kevin McCarthy said the president wants to “disparage American workers and offers no plan to fix our country from the disaster that the Democrats have created.”

Speaker Wednesday evening on Fox NewsFlorida Republican Senator Marco Rubio criticized comments made by Mr Biden at a closed Democratic Party fundraiser last week, when he said “an extreme MAGA philosophy” is “like the semi-fascism”.

“Essentially they’ve now established a shield where if you criticize them they’ll claim you’re putting them at risk,” Rubio said. “They, on the other hand, don’t criticize Republicans. They try to dehumanize, defame, and smear Republicans by calling, not elected Republicans, but Republican voters, ordinary people, labeling them semi-fascists. ”

In response, White House aides insisted his Thursday night remarks should not be taken as an open political appeal to voters. The speech, they said, details what the president sees as threats “not from the Republican Party,” but from “MAGA Republicans and the extremism that currently threatens our democratic values,” the senior official said.

The official described the MAGA agenda as “a movement that does not recognize free and fair elections, a movement that talks more and more about violence in response to actions they don’t like or are not with. disagree, which is not the way democracies behave.”

The president often talks about how, as a twice unsuccessful presidential candidate and former vice president, he felt compelled to run for the Oval Office again and restore the soul of the nation after the violent 2017 protests in Charlottesville, Virginia, led by white supremacists, an event that led Trump to say there were good people “on both sides” of the violent consequences. And he has repeatedly sought to put his presidency at the forefront of a battle that pits democracies against autocracies for global dominance.

But in recent weeks, the president’s conversations about democracy have become much more partisan and strident, including criticism of comments made last weekend by Republican South Carolina Sen. Lindsey O. Graham, who made argue that if Trump faces lawsuits for alleged mishandling of classified documents, “there will be rioting in the streets.”

“Do any of you think that if you’re as old as me, you’ve ever been to an election we’re talking about, it’s appropriate to use force and political violence in America?” he said tuesday during a speech in Wilkes-Barre, Pennsylvania. “It’s never appropriate. Never.”

2022-09-02
Previous Post: Macau sees gambling revenue drop 50% in August, but shows early signs of recovery after worst Covid outbreak ever
Next Post: Fall River pre-K students will go to the site of the old Montessori school