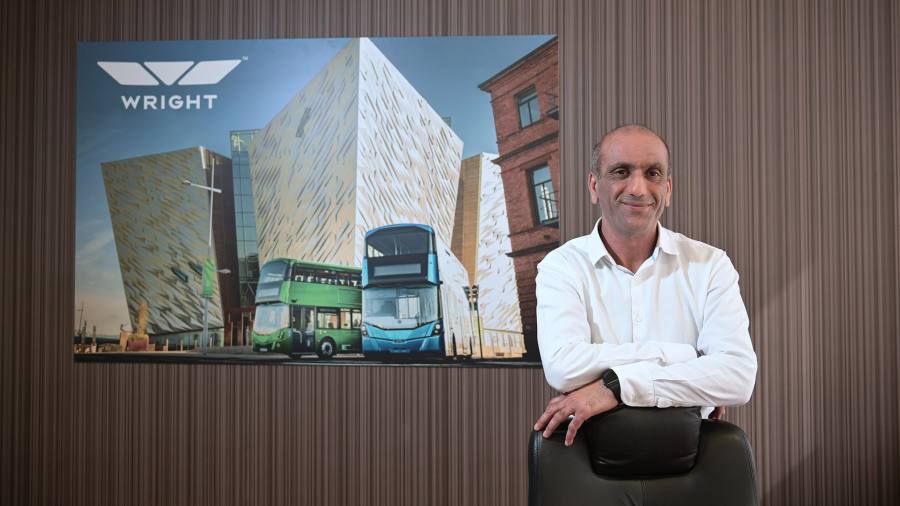 Buta Atwal of Wrightbus: “It was a big risk at the time: it’s not Tesla”

When Buta Atwal took over as head of Wrightbus in 2019, coffee mugs still littered the desks and the buses lay half-assembled on the factory floor. One of Northern Ireland’s most iconic businesses went into receivership six weeks ago.

Atwal, 53, hadn’t planned on being a chief executive of a bus company, despite a quarter century in the auto industry with Toyota and JCB, the construction equipment maker. In fact, the rescue of the business by JCB heir Jo Bamford was almost accidental: two other potential buyers had emerged and Bamford and Atwal were pressured by a local politician to show interest simply to help secure competitive offers.

But the other two parties involved in the bidding process backed down. “We were the only ones left standing and, I’ll be honest with you, it was a big risk at the time because it’s not a Tesla . . . it’s an austere industry,” Atwal says. But he intended to change all that, eyeing “the potential . . . to become a tech company, not an automaker.”

By technology, Atwal stands for hydrogen energy – an emerging clean fuel. The company – known for the iconic red ‘Boris buses’ commissioned by then London Mayor Boris Johnson a decade ago – is the world’s largest producer of hydrogen double-decker buses.

Atwal wants to see the hydrogen technology that Wrightbus is developing be transferred to other vehicles of similar size, from garbage trucks to tractors to ambulances, used by local authorities who are already among the company’s customers. .

Hydrogen may be the ambition – but added to that, the prospect of using a company that was started in a tin shed in 1946 as a launch pad for the technology is what clinched the decision to buy Wrightbus, despite initial indifference.

But the problem for Atwal, as he prepared to revive and reinvent the bus maker, was that consumer demand had yet to catch up with the vision. And after Wrightbus went from a pre-tax profit of £10.7m in 2016 to a loss of £19.5m in the first eight months of 2019, Atwal had to be pragmatic.

“Our first bus launch was a double-decker battery-powered bus, because that’s what the market was looking for,” he says. “At the end of the day, we will be where the customer wants us to be and any company that says otherwise will be out of business. It will be Kodak, which will sell technology that customers do not want.

His style paid off. Wrightbus was back in the black for the 15 months to December 2020 (the most recent results available), reporting a profit of £1.4million.

Atwal relied heavily on his background at Toyota, where he worked for a decade in manufacturing, training and development, for his turnaround strategy: gather data, formulate a plan, then move on.

“As soon as you have enough data to make a decision, make a good decision fast. . . and don’t worry too much about making bad decisions, because the reality is you’re going to make bad decisions,” he says.

But that management style was one he had to learn, he admits. “The Toyota side was less my natural game. It really stiffened me up in areas where I wasn’t so strong.

As soon as you have enough data to make a decision, make a good quick decision. . . and don’t worry too much about making bad decisions because the reality is you are going to make bad decisions

Tapping into emotional intelligence — a phrase he uses repeatedly — came easier. It’s the product, he says, of growing up with four sisters and having a wife and daughter.

His approach requires “sharp skills on data and management styles”. But as he says, “Changing a culture and understanding what worked in the old culture, what didn’t, and then using your own emotional intelligence to drive those new practices, is just as important.”

Atwal is the son of Punjabi immigrants to the UK who grew up in Derbyshire. He says his passion for football – which he plays twice a week – has taught him that success is built on teamwork.

“I understand that the emotional side of a team is just as important as the mental side… If as an organization you’re not connected, it’s not a success,” he says, describing his role not as a leader but as a “coordinator” or “facilitator” to implement a strategy in a profitable way.

With his approachable manner, easy laugh and no-nonsense style, he set up meetings with managers to see if new strategies were working. an open forum meeting with Atwal over tea and cookies. For a company that laid off 1,200 workers when Wrightbus went to the wall, he sees it as a way to hire staff.

He must himself balance the passionate hydrogen ambitions of its chairman, Bamford – with whom he worked for 17 years at JCB and as managing director of Ryze Hydrogen — with today’s market realities and changing future dynamics.

Today, the demand is for battery-powered buses, but simply “pushing batteries into a diesel bus”, as he says competitors were doing, would have been inefficient. Although he inherited only two engineers out of the 46 employees still in place to liquidate the company upon sale, he redesigned to make the battery and hydrogen buses as similar as possible, in order to reduce costs and help customers switch to hydrogen. in the future.

Who is your leadership hero?

Alan Jones, former Chairman Emeritus of Toyota UK. He was so into fusing Japanese style into a British industry, but he really connected with the business. When I talk about being in the studio, talking to people, communicating, he was the embodiment of that. I was a 24 year old young man trying to make a name for himself, but he knew who I was. I tried to reproduce this myself.

If you weren’t CEO, what would you be?

Anything that made me happy, to be honest. What I like to do is solve problems and I like to find a way out of a puzzle, and so anything that stimulates me mentally is what I would do. I am a die-hard Derby County supporter. I would have liked to be a footballer.

What was the first leadership lesson you learned?

Plan-do-check-action. It’s from [William Edwards] Deming but the Japanese adopted him. Basically, this means that before you do anything, plan out what you can’t do and do all your research, then do it. Then, while you’re doing it, check your milestones. And if things go wrong against your plan, implement the changes to keep the momentum going. It was from Toyota.

“We designed a bespoke battery bus by putting the batteries in the chassis, improving the layout of the bus, showing why an EV [electric vehicle] or a hydrogen bus are better buses than a modified diesel bus. And thanks to that kind of vision, our customers started to get on board,” he says.

Atwal diplomatically skirts the subject of what went wrong at Wrightbus, saying it “fell on hard times” due to “mismanagement” and a lack of business controls. Although his own Sikh faith is important to him, he avoids discussing how the group’s former parent company had donated millions of pounds to an evangelical churchangering the dismissed workers.

He is satisfied with the company’s travel direction. It now flies to Northern Ireland from Derbyshire two days a week to the head office – a site in Ballymena where Wrightbus moved after the tobacco group JTI Gallaher closed. To temper the gray local weather, he maintains sweltering temperatures inside his office – a taste for warmth he developed when he worked for JCB in India for four years.

Brexit has “of course” proven to be a problem with an additional administration, but Atwal is not stressed. This is another of his working philosophies. “I’d rather enjoy my job than do a job that’s financially better for me,” he says. “I’ve always said, if you don’t like it, do something else. Don’t stress your body. . . Look at something else you’re good at and do it.

But he is delighted with the turnaround challenge presented to him.

“How many people have had the opportunity to turn around a company . . . learn a different technology, a different industry? It’s so interesting. That’s what drives me.”