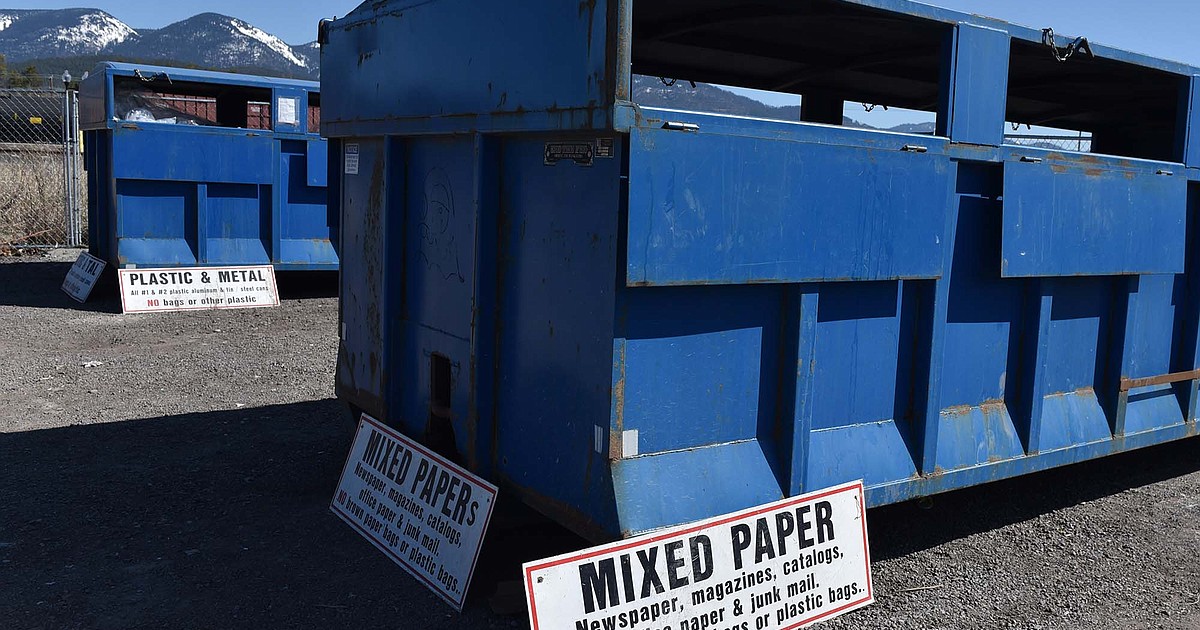 The town of Whitefish is again considering creating a centralized recycling site after the idea of ​​curbside collection of recyclables fell through.

City Council held a business meeting on July 18 to discuss a potential recycling site and decided to move forward with a Request for Proposals (RFP).

Whitefish Public Works Manager Craig Workman said he will draft a request for proposals for contractors to present an immediate recycling solution to Whitefish, as well as long-term solutions for additional sustainability goals such as glass management, food waste composting, etc. He called it a phased approach.

The former Central Recycling Center located at the corner of Columbia Avenue and Railroad Street was officially closed in late January 2022 due to overuse and contamination at the site. Additionally, the property had been donated by the city to the Whitefish Housing Authority for an affordable housing project. Talks have been going on for nearly two years to find a better solution for the city’s recycling.

In the spring of 2021, the city received offers for a central recycling facility and for curbside collection. They also solicited community feedback and considered implementing curbside recycling. That fall, in the midst of a busy season and after strong public opposition, the board deferred the decision.

“We realized we had a bigger solid waste problem,” said Craig Workman, the city’s director of public works.

Recently, the city has been scrambling to get animal-resistant containers for the garbage department and approved a contract with Republic Services in May. Mandatory curbside recycling was considered, but concerns about unsafe animal attractants made it less viable. Councilor Frank Sweeney noted that people who want a curbside service still have the option as individuals to contact Republic for such a service.

Now the council is considering the construction and maintenance of a new central recycling site, potentially located on Monegan Road, between Voerman Road and JP Road. The purpose of the working session was for council to instruct city staff regarding the installation.

“Do we want to create a simple collection facility, similar to the one we had before but better managed and better managed or do we want to open it up to a much more imaginative and ready-to-use (proposal) and give sellers and give entrepreneurs the opportunity to tell us what they think,” Workman asked.

“So I really urge you not to go back to the old norm that we had,” Butts said. “I call them ‘feel good containers’ at that time.”

After listening to public feedback, the board asked staff to write an RFP for a centralized recycling site.

“We’ve identified the fact that we’re interested in some type of community, curb-less recycling program,” Workman said. “The next step is to put out a tender… get the contractor to help with the design and once built they will manage it. We were getting a monthly bill for their upkeep of the facility.

Staff indicated that it is important to note that the costs of services have increased significantly since the last tender and that the construction of the facility, estimated at approximately $325,000, is not included in this cost. The staff proposes to finance the site with a dedicated property tax.

Alissa LaChance, owner and operator of Dirt Rich Compost, told the board last month of a federal grant under the USDA’s Cooperative Agreements on Composting and Food Waste Reduction. This year, $10.2 million will fund pilot projects that implement strategies for municipal composting plans.

LaChance said it currently processes more than 4,000 gallons of food waste per week at its Columbia Falls plant. She said that amount would quadruple if everyone at Whitefish participated in a composting program.

Dave Fischlowitz of Flathead Recon, a local glass recycling/spraying company, said Whitefish and Columbia Falls should collaborate. He suggested another potential location for the site and said we had “the intellectual power in this valley” to resolve this situation.

“As soon as there is a good system, the amount of glass that can be saved from landfill will explode,” Fischlowitz said.

The proposed phased approach allows the city to pursue a central recycling program as soon as possible while allowing more time for the introduction of services like glass processing and composting that will help the city achieve its sustainability goals.

“I think we should work long term…” Councilor Rebecca Norton said. “We could also integrate glass crushing into our system. Moreover, we lose a lot of money if we do not act on the subsidy opportunity (reduction of food waste). »