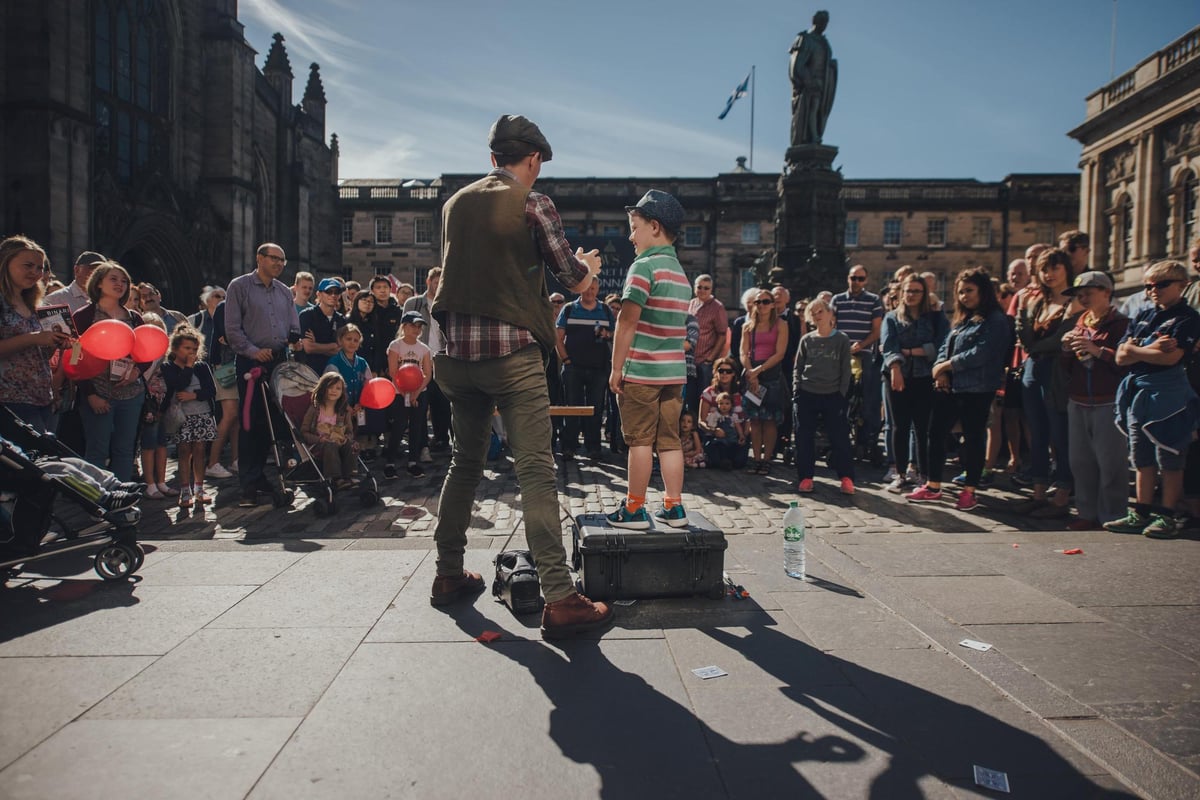 Edinburgh Festival Fringe: Free street theater performances will spread across the city center as part of the 75th anniversary expansion

More spaces are to be created for circus acts, buskers, “living statues” and bands appearing in Fringe shows for the festival’s 75th anniversary season in August.

An official Fringe walking route will also be created between the Royal Mile and the St James area, via The Mound, Princes Street Gardens and St Andrew Square, to help ease traffic congestion and encourage festival-goers to visit different locations.

The free street theater areas will be extended for this year’s 75th anniversary edition of the Edinburgh Festival Fringe. Photo: David Monteith-Hodge

The Scottish Government and City Council will provide £215,000 to help pay for the expansion of traditional ‘street event’ arenas on the Royal Mile and The Mound area, where free shows will still be staged.

However, the revamped plans for this year also aim to ensure that people will have more room to gather to watch artists and entertainers in and around the High Street, Parliament Square and Hunter Square, and in The Mound area.

New stages will be created to help promote Fringe shows and acts in St Andrew Square and Cathedral Square in the St James Quarter.

An outdoor art exhibition celebrating 75 years of the Fringe will also be held in East Princes Street Gardens, while St Andrew Square will also host free screenings for the film festival’s opening weekend.

The St James area is set to become home to a major new hub for the Fringe this year, with the BBC set to hold a 24-hour program of events and shows at a Speigeltent-style venue in St James Square near Multrees Walk .

Part of George Street will also be closed to traffic outside the meeting rooms, where a 40-foot-tall tree sculpture is being created for the Fringe.

Street performances have been an integral part of the festival since the 1960s, but the staging of the shows has been run since the late 1990s, when their growing popularity saw the city council ask the Fringe Society to help tame the growing crowd.

Official council reports have in recent years warned of the need to tackle crowd congestion in parts of the old town during peak periods.

This year’s expansion plans have been revealed to coincide with the release of a new Street Events Charter aimed at securing the future of street performers and buskers at the Fringe and ensuring that “the voices of street artists be heard” in discussions about how the festival is staged each summer.

Fringe Society CEO Shona McCarthy said: “We are thrilled to reveal our new and expanded plans for this year’s street events, one of the most visible aspects of the Fringe, enjoyed by audiences every year.

“The new route will allow the public to stroll through Edinburgh’s majestic Old Town and New Town, enjoying the artists in different locations.”

The charter commits the Fringe Society to trying to protect traditional performing grounds on and around the High Street and The Mound, as well as offering advice and support to street performers.

The Street Performers’ Community Commitments, which worked with the Fringe Society on the new charter, state: “Street performers understand that historic street performance sites are shared spaces in the public realm; continued use of these spaces is not guaranteed and requires ongoing negotiation and collective thinking and working.

Ms McCarthy added: “I am incredibly thrilled to see the release of the new Street Events Charter, developed in collaboration with the Fringe Society and the street performing community.

“Fringe and street events are in each other’s DNA and part of the cultural heritage of beautiful Edinburgh.

“This collective step establishes a great model for working more collaboratively to ensure the Fringe is the best possible version of itself for the next 75 years, for artists and residents alike.”

A statement from the street performer community said: “The charter marks a new chapter in what we plan to be an artist-led street festival for Edinburgh’s local people and its many visitors.

“We are delighted to work with the Fringe and its partners, to keep alive the long history of street performance at the heart of the festival, as we celebrate its 75th anniversary.”

The Fringe Society is partnering with Unique Events, organizers of the city’s Burns and Beyond and Hogmanay festivals, to run the official street theater zones for the second year in a row.

Director Penny Dougherty said: “We’ve been talking to the Fringe Society about street events since before Covid, as the crowds were getting so big they needed to help out more.

“The idea this year is to really spread things out a bit more and try to create more of a journey through the city centre, rather than condensing everything into High Street and The Mound.

“The two stages that were previously in use on the High Street will now have their own spaces in St Andrew Square and Cathedral Square.

“There will still be six locations for artists and buskers around the High Street, but there will be more breathing space and less infrastructure this year.”

Paul Bush, Events Director of VisitScotland, said: “Street events are an integral part of the Fringe, providing audiences with the opportunity to tune in to performances and sample the festival for free.

“Scotland is one of the best places in the world to experience events, and after the challenges of the past two years, now is the time to plan and enjoy experiences like street events that stir emotions and elevate your mood.”

Nick Peel, Managing Director of St James’s Quarter, said: “St James’s Quarter is a welcoming cultural and lifestyle hub for art, culture and fashion and we are passionate about supporting the cultural offering. world-renowned Edinburgh and its dynamic calendar of events. ”