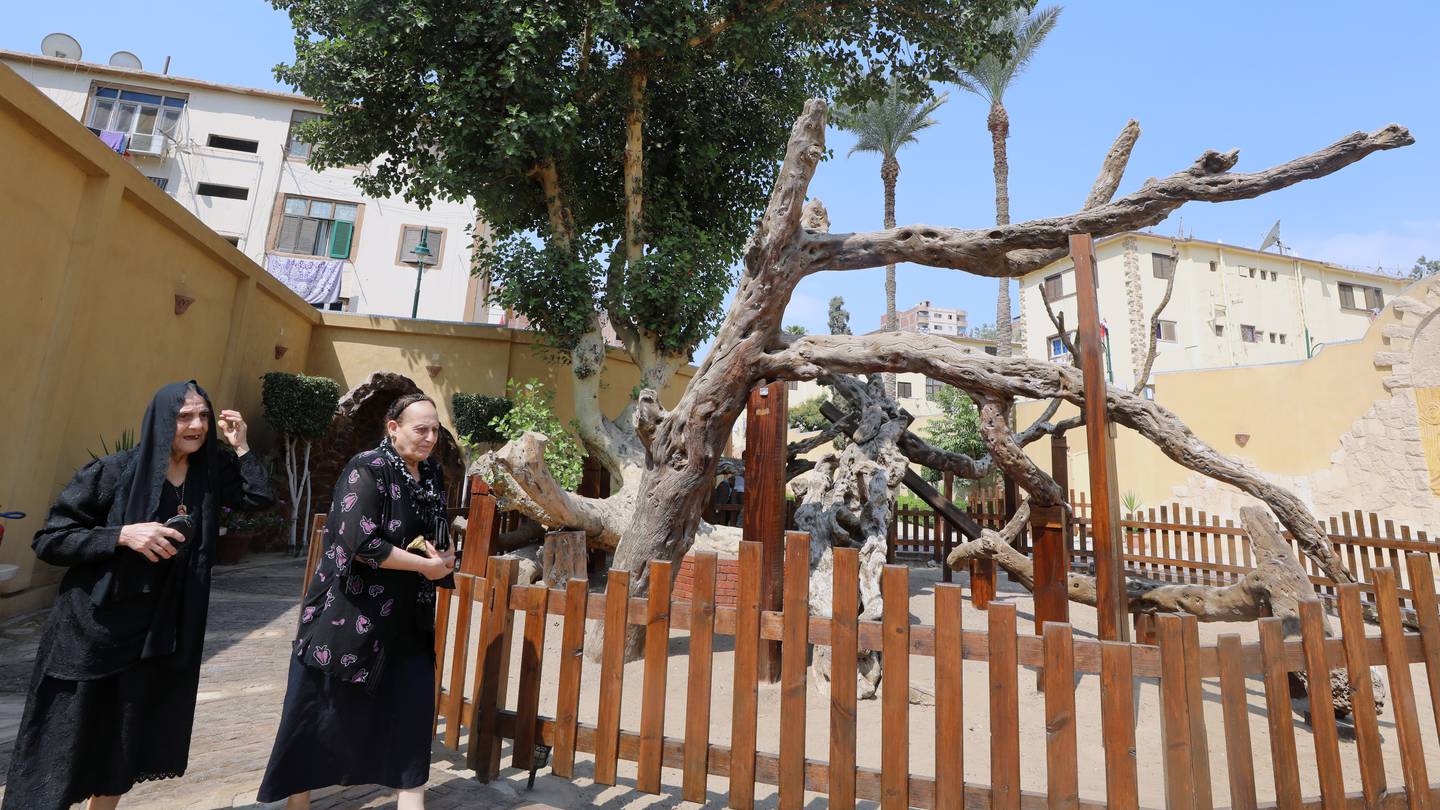 The Tree of the Virgin Mary, one of Egypt’s most important Christian relics, was reopened on Sunday after a months-long renovation by Egypt’s ministry of antiquities.

The site is believed to have been one of the stops on Jesus’ family’s journey through Egypt after fleeing Judea (today’s Palestine) to escape persecution.

Located in Cairo’s northern district of Matariya, one of the poorest neighborhoods in the Egyptian capital, the walled garden that houses the tree has been renovated.

It now includes a new visitor center and information banners, an offering from the country’s tourism ministry to highlight the country’s Christian heritage sites.

The original tree, a sycamore under whose shade Mary and the child Jesus sought refuge, according to the Gospel of Matthew, died in 1656. At that time, a group of Franciscan monks removed some of its healthiest branches and planted them.

The second tree has also since dried out and its withered remains are now displayed inside a fenced area in the garden.

A third generation of the tree was then planted in the courtyard of the nearby Church of the Blessed Virgin Mary, according to Mai Fouad, an official with the Ministry of Antiquities.

Then, about 50 years ago, a branch was cut from the third generation tree and replanted where the first tree stood. It grew into a towering 10-meter sycamore that exists today and continues to bear fruit.

Mrs Fouad said The National that a group of French soldiers who had fought in a battle against the Ottoman army in 1800 sought refuge at the Chapel of the Tree after contracting a painful skin disease.

According to legend, a chapel priest took the sap of the tree and rubbed it on the wounds of the soldiers, after which they were completely cured.

“They carved their names into the tree to commemorate the miracle and you can still see traces of them there,” Ms Fouad said. She pointed to feigned letters visible on the second generation dead trunk of the sacred tree.

Additionally, a well inside the garden, which dates back to Roman rule of Egypt and is believed to have provided water for the family, has been updated with a concrete and sandstone exterior and decorated with colorful statues of Jesus, Mary and Joseph.

According to Mrs. Fouad, it is believed that the Virgin Mary washed the clothes of Jesus in the well and when she squeezed the water from it onto the ground, a plant of myrrh sprang up.

The fragrant oil of myrrh is particularly important in the Christian faith and is often used to anoint the faithful in order to bless them.

The garden has undergone minor renovations over the past 20 years. However, the most significant update came in 2000 when an Egyptian charity added two more structures to the garden: a small gallery and a visitor center, which was expanded this year.

Inside the gallery there are three paintings, with a large oil rendition of the Matariya neighborhood as the centerpiece. The painting was done by an 18-year-old Korean artist, according to Ms Fouad.

It depicts Jesus and his family standing under the tree and in the background the obelisk of the ancient Egyptian pharaoh Sesostris I, another of Matariya’s important relics.

The painting also depicts the grotto that would have served as the family’s shelter, over which the Church of the Blessed Virgin Mary would be built.

The family is depicted as having Korean features in the oil painting, specifically Joseph’s East Asian-style facial hair.

“Each artist who contributed to the decoration of the garden imagines the holy family as he sees fit,” Ms. Fouad said.

“However, there is one thing about this painting that is not necessarily historically accurate. We are told through various religious traditions that Joseph was an old man when he made the journey to Egypt, and the Korean artist painted him as a young man.

Also inside the gallery is a smaller painting of the family near the Giza pyramids and another of the Virgin Mary.

Inside the visitor center, a map in the middle of the room shows a number of other places in Egypt that the family are said to have visited on their trip.

For Egyptians, tickets to enter the garden cost 10 Egyptian pounds ($0.52) with a 50% discount for students.

2022-09-19
Previous Post: Vedanta-Foxconn chip manufacturing site to be finalized in two weeks
Next Post: An interactive map shows how King owns most of Wales’ coastline – discover your area