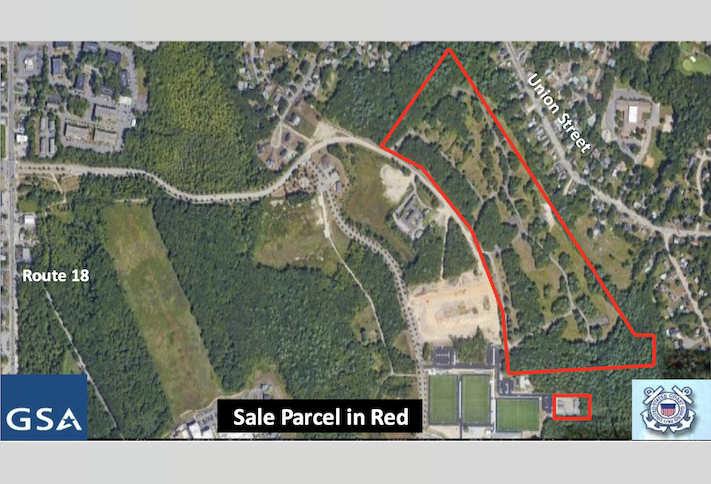 A map of the 51 acre site that the GSA is auctioning in South Weymouth.

The Federal Government’s property arm is seeking buyers for 51 acres in South Weymouth, part of the 1,400-acre site of a former naval airbase.

The General Services Administration last week launched an online auction for the site, despite the local agency overseeing the broader redevelopment of grassroots opposition to the sale process, Banker and trader reports.

The Southfield Redevelopment Authority, which selected private developers to build on other parts of the site, tried to buy this 51-acre piece of land from the federal government for two years. The GSA said in a statement to Banker & Tradesman that it rejected SRA’s bid because it believed it could secure a higher bid through the auction.

The site previously housed 165 living units for the Coast Guard, which demolished the units between 2003 and 2015, and it now consists of three garages, a small office and surface parking.

Private developers have built over 1,200 homes on other parts of the former South Weymouth Naval Air Base, which was decommissioned in 1997. The SRA has also considered a large commercial development on the site and, in January 2020 , she selected a team from Brookfield Properties. and New England Development to build on a 400-acre portion of the base, the The Boston Globe reported at the time.