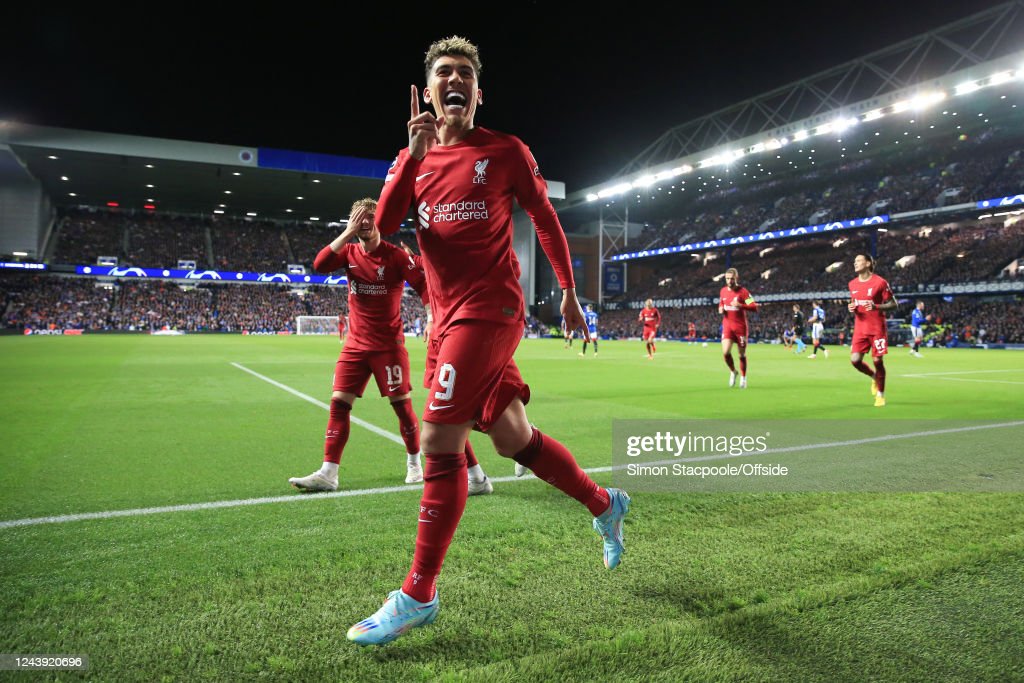 “On another level“. Roberto Firmino scored a brace and produced a moment of magic to boot Darwin Nunez through a daring film as Liverpool relentlessly tore Rangers apart on their home turf. He walked off the pitch with a beaming smile, holding his Man of the Match award and rightly receiving a nomination for Champions League player of the week. The striker has certainly made a compelling case in his bid for an extended contract.

Firmino’s rejuvenation has been one of the most positive developments in what has been a disappointing season for Liverpool to say the least. He stepped up time and time again to pull the Red’s out of the deep holes they dug, reminding Europe of his undeniable quality.

With the signatures of Diogo Jota, Luis Diaz and Darwin Nunez, Firmino, once the heartbeat of Klopp’s side, had been phased out in favor of younger, more dynamic forwards as he began to show signs of decline. Last season, the striker only managed five premier league goals – he has already surpassed that tally with 30 games remaining. Few could have predicted how integral his influence would have been in this campaign.

Anything changed in Firmino’s routine has certainly worked wonders. Whether it’s the arrival of Darwin Nunez or the struggle to establish himself in Brazil’s World Cup squad: the fire he now has cannot be extinguished if he is to continue this fine form. He seems to have returned to his 17/18 self, with elegance, fluidity and intelligence aplenty.

This season, Firmino has gone from a false 9 to a more traditional 10. He begins to play deeper, to gain space and to exchange with Darwin Nunez in a smoother system. As the 31-year-old continues to age, Klopp’s tactical change appears to have benefited him immensely, with the advanced midfield role tailor-made for Firmino.

Despite this, he seems to have discovered a poacher’s instinct, with Firmino constantly finding himself in the right place at the right time, his clever movement proving beneficial.

The Brazilian is producing an impressive comeback with eight goals and four assists in 12 games. In terms of numbers, he is in the best goalscoring form of his Liverpool career, currently averaging a goal every 88 minutes and 1.5 goal contributions per 90. Close behind Erling Haaland at 1.97

As Liverpool fell behind for the 14th time in their last 20 games, it was once again up to Firmino to spark the comeback.

He jumped on it Jacques Tavernier to nod into Kostas Tsmikas’ corner at the near post to spur Liverpool into action – the 4th time this season he has netted the equaliser.

Firmino then doubled his tally, heading home with his weak foot from close range, getting an excellent through ball from Joe Gomez.

A sublime back heel assist put the icing on the cake on what was a vintage performance from Firmino. His perfect touch, silky footwork and cocky swagger seem to have returned after a long sabbatical.

Assistance upgraded him to Steven Gerard as having provided the most Champions League assists for Liverpool with 12.

“I think he’s one of the smartest footballers I’ve seen in a very, very long time. His awareness of the game and his intelligence of the game are absolutely second to none.. Great footballer,” said Ally McCoist after the game.

It remains to be seen if FSG decide to hand Firmino a new contract, with John Henry not too keen on extending players over 30. But with James Milner and Jordan Henderson recently signed new deals, it’s hard to justify not keeping Firmino on board.

His story at Liverpool isn’t over yet, more chapters are yet to be written.

Whatever happens, Firmino will go down as a Liverpool great and one of the most influential players of the Klopp era.

If he does stay, he has proven he still has a vital role to play in Liverpool’s endless pursuit of success.