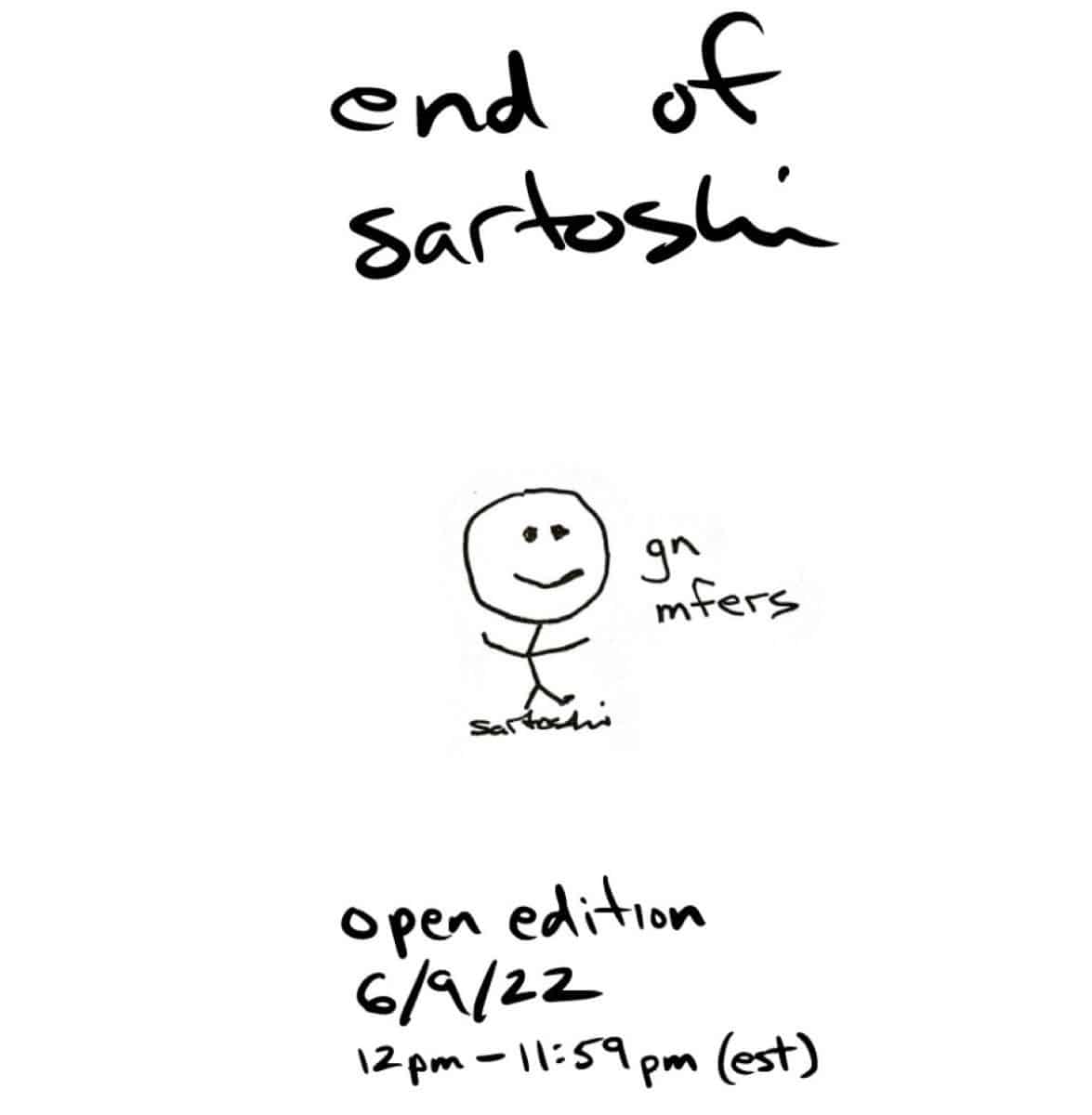 From Mfers NFT to just-in-time demise

It’s a sad day for NFT meme lovers as popular NFT influencer sartoshi is giving the NFT space a permanent ‘gn’ with the end of sartoshi. Rather than providing a reasoning behind the move, the anonymous character instead explained what the future of the mfers NFT collection will look like without them.

However, the NFT community is divided over sartoshi’s latest move – an open edition collection that made 828.621 ETH (nearly $1.5 million currently) in sales at the time of writing. So, was this a meme-maker’s masterstroke, or just a nifty rug pull done for all to see?

For those who don’t know, sartoshi (@sartoshi_nft) was an anonymous NFT collector and meme artist. As many will notice, their pseudonym was a reference to the mythical creator of Bitcoin, Satoshi Nakamoto.

In recent months, sartoshi was best known as the creator of the mfers NFT project. From the start, the collection divided the NFT space. While some loved it for its depiction of the meme culture that is so central to NFTs, others decried it as an insult to hard-working “real” artists who didn’t see the success of mfers.

To illustrate, these number PFPs have a current floor price of 1.65 ETH on OpenSea. Similarly, the collection amassed an incredible 38.7K ETH in secondary trade volume. That’s almost $69 million (hehe) at today’s prices.

Breaking the end of sartoshi

Earlier today, sartoshi announced his departure from the NFT space via a Tweet and the accompanying blog post. Significantly, the post contains no real explanation as to why Sartoshi decided to leave now. Instead, it just starts with a number of tweets from random Twitter users who predicted that sartoshi would indeed take inspiration from Satoshi Nakamoto eventually vanishing from space.

To clarify, after the fall of mfers in late 2021, a group of mfer holders created an unofficial mfer Discord and multi-signature vault to function as an unofficial project treasury. Now, after stepping away from the process to allow the community to dictate its direction, sartoshi is essentially giving these OG mfer holders control of the project.

in addition, sartoshi has made changes to mfers royalty payments. To explain, there is a 5% royalty on every sale of NFT mfers in the secondary market. The new distribution of royalties is as follows:

How is the NFT community reacting to the end of sartoshi?

For members of the NFT community who loved what mfers stood for, sartoshi’s move was an act of genius. On the one hand, it imitates the story of Satoshi Nakamoto. On the other hand, it also guarantees that the life and future of mfers will exist independently of its creator.

However, not everyone was so generous in their reactions. On the contrary, many people on Twitter are saying that it marks the completion of sartoshi’s mfers mat slow pull. This comes despite the fact that the project arguably popularized the stance of meme NFT projects having no roadmap or utility. Nonetheless, some people are big critics of sartoshi, as seen in the tweet above from Hustler (himself a highly controversial influencer).

What sparked the most anger, however, was the decision to leave with the “end of sartoshi” fall. Open editions are controversial in a vacuum, let alone when dealing with a polarizing figure like sartoshi. So the fact that they dropped the collection just before leaving the space rubbed many the wrong way. Not to mention how much NFT has already earned.

So what do you think? Was it a real meme masterpiece, or just another serial mat-shooter taking advantage of the NFT space? No matter where you fall on the spectrum, one thing is certain: the legend of sartoshi will be remembered in NFT space for quite some time.

Are you tired of missing significant NFT drops?

Just check out our NFT schedule!

Get the biggest NFT news of the day and recommendations in our Daily newsletter.

All investment/financial opinions expressed by NFTevening.com are not recommendations.

This article is educational material.

As always, do your own research before making any type of investment.