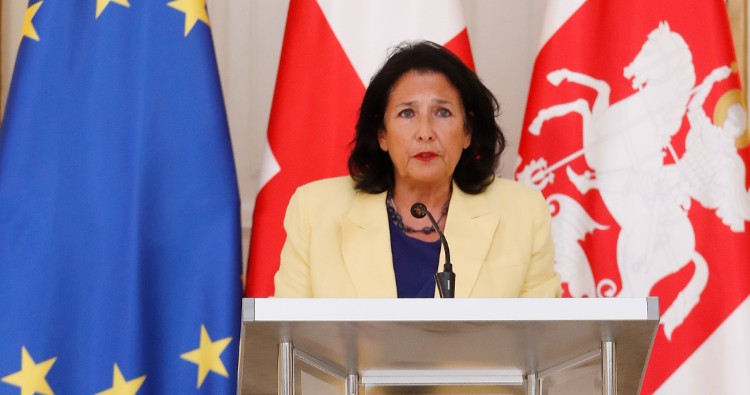 Georgian President Salome Zurabishvili on Wednesday vetoed a ruling party bill that expands the scope and deadlines for secret investigations, surveillance and wiretapping by state authorities, citing concerns over of human rights in its decision.

Approved by parliament several weeks ago, the now vetoed bill will likely still be approved by the ruling party despite the veto, but Zurabishvili said she was making the decision anyway to highlight its “political rather than legal veto” on the issue.

Zurabishvili stressed that she believed that approving bills “restricting human rights” was “wrong” in the political climate where the country’s authorities were “asked to provide more [human rights] guarantees and be more democratic”.

She added that she would veto “all bills that reflect the wrong direction” over the next six months, as the country enters a crucial phase to meet the European Commission’s conditions before the end of the year to receive the status of candidate for membership of the European Union.

The bill increases time limits for covert investigative actions from six months to nine months, with wiretapping and surveillance potentially extending indefinitely in some cases.

During her briefing, Zurabishvili also criticized both the Georgian government and the opposition, noting that she was “completely concerned” about the “confrontation, insults, intolerance and disobedience” that both sides have made. evidence during Wednesday’s parliamentary session, instead of showing “restraint, politeness and respect”. which she said would show the positive side of Georgia to its European partners.

Let’s not dwell on what happened in the past year and what led [this month] to [European Commission’s] decision [to issue a set of conditions for granting Georgia the EU membership candidate status]which will probably be [formally] approved in two days [by the European Council],” she says.

The important thing is what is happening now, what we are doing in the past few days in order to present our problem in the most positive way and achieve positive results [in Georgia’s EU membership bid]“, underlined the president in her remarks.

2022-06-23
Previous Post: Nothing Phone (1) will be sold through an invite-only system, company confirms
Next Post: Hidden in Plain Site is a virtual tour of Richmond’s dark past