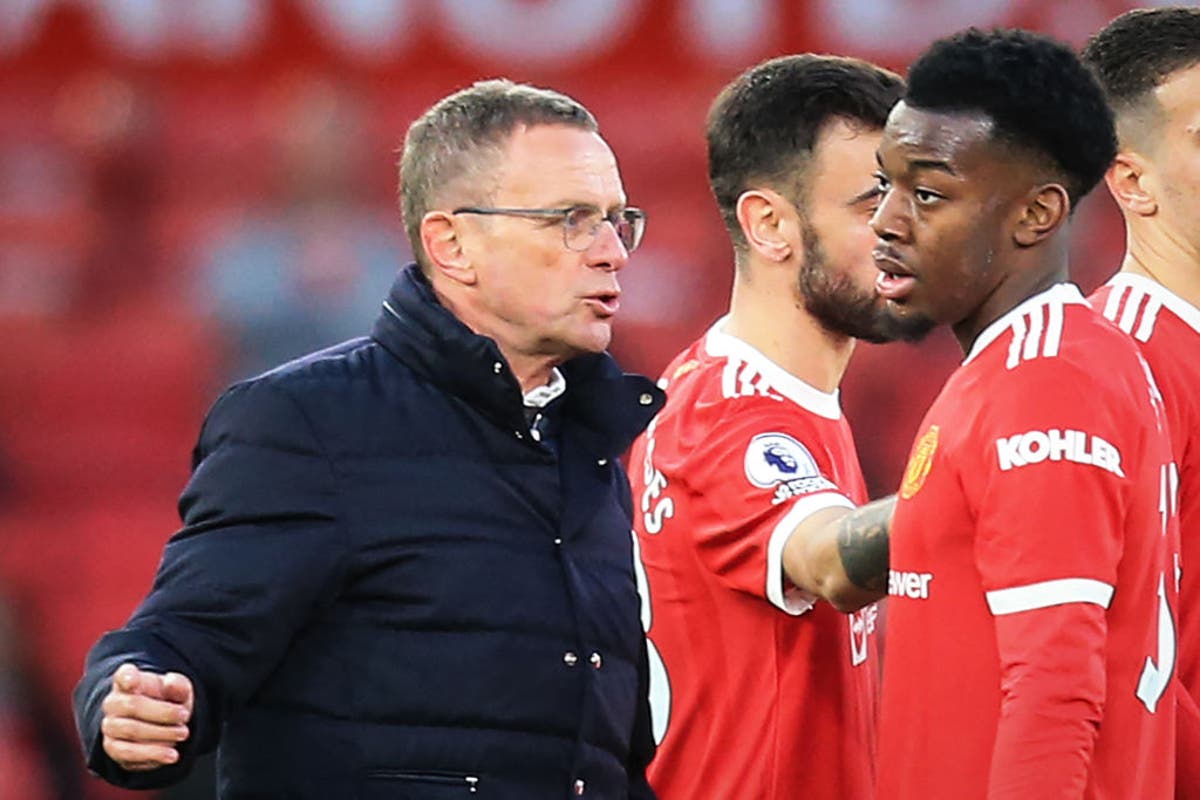 Jurgen Klopp can often sound prophetic, but not when discussing the appointment of another evangelist for the pressing game. “It’s not good news for other teams,” Klopp said when Ralf Rangnick became Manchester United’s caretaker manager. The final verdict, which should either clinch a Champions League place at United’s expense, could actually be pretty good news for either Tottenham or Arsenal.

Klopp could praise a position of strength. Liverpool had helped expose Ole Gunnar Solskjaer’s managerial inconsistency, taking a 5-0 lead after 50 minutes at Old Trafford. Klopp argued on Monday that Rangnick had made a difference. “You can see the changes he made, the parts he improved,” he said. Still, the caveat underscored a sense that this is not a Rangnick team, nor one defined by intensity or fluidity. “He took a hard job, without having time to get there,” Klopp added.

No time to catch Liverpool, anyway. They were eight points clear of United when Solskjaer was sacked. Rangnick was never likely to be a threat to them for a season; it would take a dramatic improvement in United’s performance level to derail their title challenge at Anfield on Tuesday night.

Rather, the potential danger stems from Rangnick’s greater strength. United have perhaps gegenpressing’s greatest ever sporting director as manager. The German’s future consultant role is vaguely defined at the moment – “we have agreed a contract as an adviser”, he said 10 days ago – and it might seem typical of United if he ended up as another highly paid person on the payroll who did little.

Use his expertise, however, and Rangnick has the potential to irritate Liverpool. Few people have a better idea of ​​what Klopp wants than a man who shares similar beliefs and is used to signing such players.

Red Bull clubs became an elite finishing school during Rangnick’s time as director of football. Liverpool bought Naby Keita, Takumi Minamino and Ibrahima Konate from Salzburg or Leipzig. Sadio Mane, Klopp’s first big buy for Liverpool, is also an excellent signing from Rangnick, taken to RB Salzburg for just £3.6million. But for a Covid crisis on their finances, they probably would have bought Timo Werner in 2020. And if they can reflect that turned out to be a lucky escape, with Diogo Jota instead emerging as a more prolific alternative, there has hints that Karim Adeyemi has caught Liverpool’s attention now.

Meanwhile, Rangnick also managed Joel Matip at Schalke and helped sign Roberto Firmino for Hoffenheim; like his last sidekick Mane, the Brazilian was bought at 20, his ability recognized while still in the works.

While Brendan Rodgers’ scouting policy has been jokingly described as having a season ticket for Southampton, recruiting in the Klopp years involved studying plenty of footage of the Red Bull empire. This is Rangnick’s specialized subject. He was the talent scout par excellence.

Liverpool’s rise has been propelled by brilliant recruitment. Klopp had an absurdly high strike rate when buying. This is partly about identifying targets, partly about sealing the deal. They’ve tended to master every element while United have arguably only had one truly outstanding signing – Bruno Fernandes – since Sir Alex Ferguson retired.

United usually owns the funds. What they lacked was clarity of mind, quick reaction, persuasiveness or the idea of ​​using players. They managed to make an offer for Mane the year before Liverpool signed him, however, as a reminder that Mauricio Pochettino and Klopp can like the same players, Tottenham presented the opposition in 2016. Fabinho were interested in United but Liverpool let them down. stole a step.

With net spending lower than United, Chelsea and Manchester City in recent years, Liverpool have less room for error. Their trump card came from being right time and time again. But many of United’s signings, from Paul Pogba to Cristiano Ronaldo, weren’t on their radar. They often shopped in different markets at a time when United were buying stars but Liverpool were making them.

That could change if Rangnick gets his way. He said United needed more physicality. He submitted his recommendations to the United board on current players. Whether they listen remains to be seen. He may be Anglophile in recruitment – he took Emile Smith Rowe to RB Leipzig and wanted Jadon Sancho and Jude Bellingham, both Klopp-type players and the teenager possibly Liverpool’s ideal buy this summer – but has a thorough knowledge of his native country.

Rangnick has often been ahead of the curve; further even than Liverpool, no doubt. Or, at least, he signed players at a stage in their development when they weren’t ready to make their mark at Anfield. Liverpool noted improvement at Leipzig and Salzburg; so, in cases like those of Erling Haaland and Dayot Upamecano, others have.

Now Liverpool are entering an era without the hugely influential Michael Edwards, the outgoing sporting director; some of his replacement Julian Ward’s background and contacts are in South America and Portugal, rather than Germany and Austria, and Luis Diaz represents an auspicious arrival. The meaning may be that Klopp and Peter Krawietz, his assistant coach, are the Central European experts at Anfield.

United can call on the services of another, in a man who starts his last games in a dugout. That they do is instructive. In low-key football director John Murtough, technical director – and touchline presence – Darren Fletcher and CEO Richard Arnold, they have a new power structure. In Erik ten Hag they will have a manager who will probably have his own ideas about what kind of players he wants.

But they will have someone with a better recruiting record than anyone else, a consultant whose track record suggests he could target United’s scattergun spending more and whose history indicates he would like the same type of players as their fiercest rivals and, in some cases, the same individuals.

United fell so far that it was relatively uncontroversial when last month Rangnick named haters as role models. He argued that Liverpool and City had recruited well over five or six years. At Old Trafford, he argued, “maybe in two or three transfer windows the situation could be different”.

Their vast resources give them a chance to catch up or simply disrupt others’ plans. There are precedents of teams recruiting well, spawning copycats. Arsene Wenger’s Arsenal lost their competitive edge when others started targeting the French market. Liverpool may be football’s money and its owner, John W Henry, sought – but was unsuccessful – to hire Oakland Athletics general manager Billy Beane for the Boston Red Sox.

It’s a moot point whether Edwards or Rangnick is a closer footballing counterpart, while time will tell if the German is just a footnote in United history, a six-month-old keeper .

For now, a relationship with Klopp that dates back two decades is on hold. There has been no contact between them since the older man joined United. But it remains a society of mutual admiration and perhaps Klopp’s compliments in December reflected a fear that Rangnick would be brought in to shape the direction of the club and make United embrace Liverpool’s ethos.

If so, while a rivalry will be renewed for 90 minutes on the Anfield ground, the most enduring battle will be in the transfer market.

2022-04-19
Previous Post: Micronclean completes £400,000 investment in Lincolnshire site
Next Post: All about “Keeper Of Time”, the world’s first watch movie