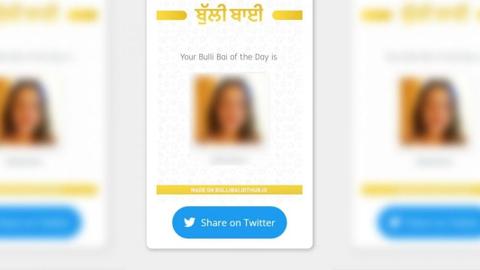 Photographs of more than 100 prominent Indian Muslim women were listed on the bogus auction website, in a case that sparked outrage across the country.

Indian police have arrested a man and woman suspected of being involved in selling prominent Muslim women for sale on a bogus online auction website.

The Mumbai Police Cyber ​​Unit arrested the two suspects on Tuesday following a complaint from one of the women targeted, government officials said.

Police have filed a complaint against the man, a 21-year-old engineering student, and said they were further investigating the woman. It was not clear if the two had created the website.

Photographs of more than 100 prominent Indian Muslim women, including journalists, activists, movie stars and artists, were posted last weekend without their permission on a website and put up for sale for a fake auction.

The website, which was shut down within 24 hours, was called “Bulli Bai,” a derogatory slang term for Indian Muslims.

Although there was no actual sale, Muslim women listed on the website said the auction was intended to humiliate them, many of whom spoke of the rise of Hindu nationalism in India and some of the policies of Prime Minister Narendra Modi.

The website was hosted on GitHub, a San Francisco-based coding platform.

A spokesperson for the company said GitHub had removed the user account that hosted the website on its platform and that it would cooperate with investigating authorities.

Police in at least three states said they have opened an investigation into the incident and filed criminal complaints against the developers of the website, based on complaints from the women targeted.

It is important to take immediate action against perpetrators of online abuse. Impunity leads to the repetition and spread of abuses. Muslim women online auction in India. #sullideals #bullideals https://t.co/7fPe8tBHwE https://t.co/BJ2Kvw89Vu