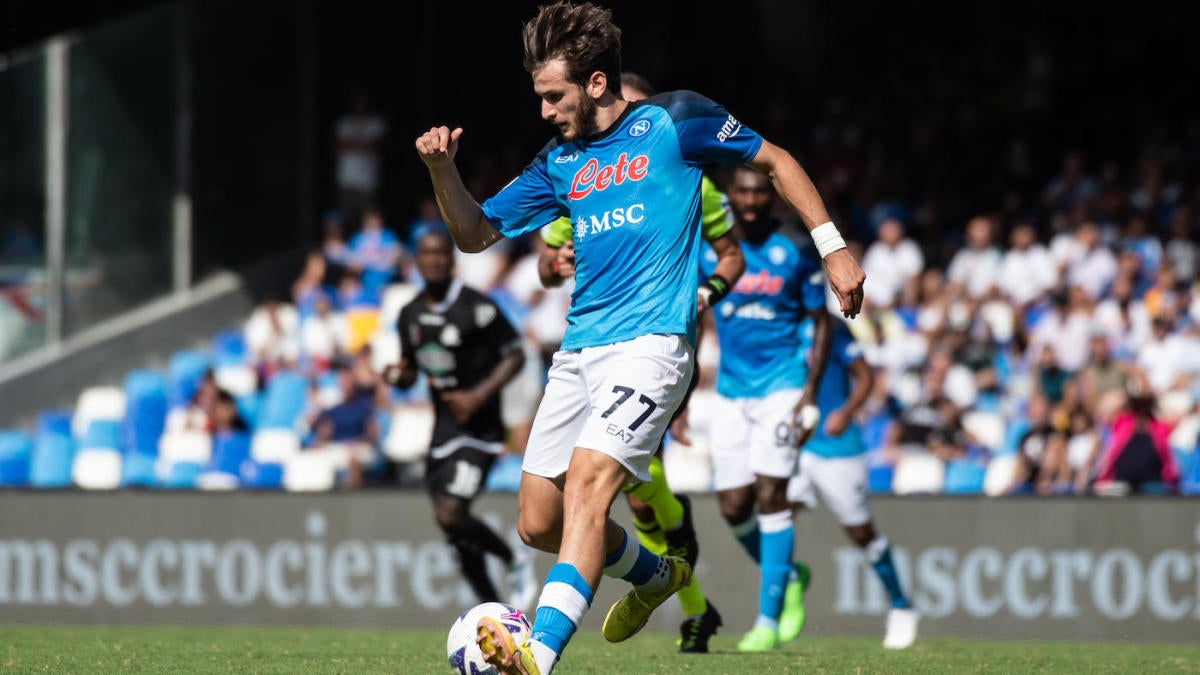 Naples have solidified themselves as one of the most exciting teams to watch this season around European football. Luciano Spalletti has helped build a team that is fun to watch and loaded with new talent that Gli Azzurri fans in Napoli are delighted with.

Only a few could imagine that kind of impact from the start, especially after a summer exodus that featured the likes of Kalidou Koulibaly and Fabian Ruiz exit and ownership drops club legends Dries Mertens and captain Lorenzo Insigne as free agents.

Napoli, currently leaders of Serie A with 14 points from six games, tied with Atalanta and AC Milan, have a Sunday showdown with the Rossoneri at the San Siro with a chance to start establishing some headroom at the top of the table. Given that it’s only the start of September and there are still 32 matchdays left in the season, this fixture might tell us more about this Napoli’s long-term potential than it does about their position in the league. title race this season. So what can we expect from Napoli after this summer’s reshuffle?

Imagine telling a Napoli fan at the start of the transfer window that the club were close to selling Koulibaly and Ruiz in addition to letting free agents and club idols Mertens and Insigne bid farewell. It seemed like a bitter pill to swallow, but club owner Aurelio De Laurentiis, ever meticulous with finances, determined it was the right time for a change.

After selling both stars with contracts expiring in June 2023 for around €60m in total, Napoli have reinvested in talented young players. They landed defender Kim Min-Jae for around €19.5m, forwards Giovanni Simeone for €15m and Giacomo Raspadori for a total commission of 30 million euros between the loan and the obligation to buy and Tanguy Ndombele via a loan from Tottneham Hotspur.

But the biggest deal over the summer was to acquire an under-the-radar 21-year-old Georgian talent who lit up the Russian Premier League before Russia invaded Ukraine and left the path of its club career uncertain. Khvicha Kvaratskhelia, a Georgian winger who has become a household name for Napoli fans, arrived at the club for around €10m in one of the most surprising transfers of the summer.

Kvaratskhelia is the man everyone – including Thierry Henry in the video above – is talking about lately. And rightly so. The young Georgian star has caused a sensation since the start of the season with four goals scored in his first six Serie A games, and two assists in all competitions.

He is used as a left winger under Spalletti’s system in place of former captain Insigne. For some, those are huge shoes to fill at a club that hasn’t won a Serie A title since the days of Diego Armando Maradona in 1989-90. But Kvaratskhelia, who turns 22 in February, has shown the right attitude on and off the pitch with a fan base that desperately needs a Scudetto. So much so that Napoli fans who dream big have dubbed him ‘Kvaradona’ after the Argentine legend.

In terms of numbers, the first returns – four goals and two assists in 368 minutes in Serie A – have been phenomenal. Three of his goals came from open play, including one from a header, while nine of his 18 shots were on target. He also created eight chances and completed eight of 28 takeover attempts while posting an 81.3% passing accuracy completion percentage.

Apart from the stunning numbers, Kvaratskhelia showed confidence from the start to take shots from outside or inside the box, score headers, take on defenders one on one with his dynamic pace. You put it all together and early feedback suggests he’s on his way to becoming one of the best players around and it won’t be a surprise if Europe’s top clubs knock on Napoli’s door next summer.

The mastermind behind Napoli’s early success is Luciano Spalletti. The Italian coach has failed to win a trophy in Italy for the past 14 years, but he has improved every team he has coached, including his stops at AS. Rome and InterMilan. After being sacked by the Nerazzurri, Spalletti remained patient before making his return to the pitch once the right opportunity presented itself. Napoli was the perfect change of scenery for Spalletti to build something new and exciting.

Spalletti’s debut season left some fans feeling Napoli could have done more in the race for the Scudetto, especially with the number of points Inter Milan and AC Milan dropped in the second half of the season. . Napoli finished third, seven points behind AC Milan, and were unlikely to make the leap to the Championship contender’s title once they were hit hard with injuries, especially for Victor Osimhenwho was absent for more than two months between November and January.

This year is different for Spalletti, who has been able to adapt his style of play to a new tactical system. The former Inter Milan manager is known for playing with the 4-2-3-1, but this season he left in the first match to play with a 4-3-3 which sees Piotr Zielinski act as both midfielder and number 10, with a more flexible attitude between attacking and midfield lines.

They also staged a dream start to the Champions League group stage with wins at home to Liverpool and at Ibrox against Rangers to score six points from six with four games remaining. Reaching the knockout stages in a group that also includes Ajax could be a decent barometer of where Spalletti’s men are at before the European club season comes to a halt for the 2022 FIFA World Cup in November. and December.

It’s too early to determine if Napoli have the chops to contend for the Serie A title for a full season, but they may have what it takes to make things interesting. Winning the Scudetto would be more than a historic feat for fans of a city that has been starved for the title since the days of Maradona. If Spalletti, Osimhen and a man nicknamed Kvaradona deliver, they will forever be remembered as heroes in Naples.