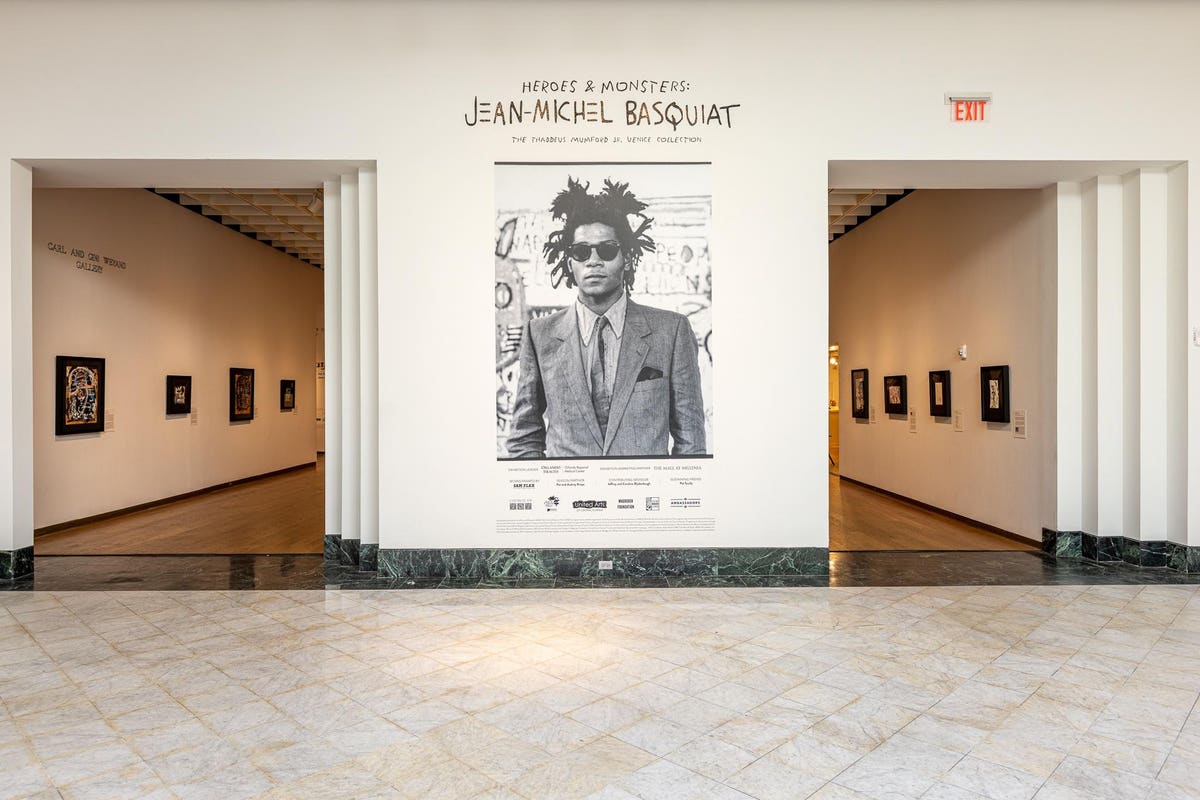 A cynic would be forgiven for thinking this all looks too much like a movie. A famous television writer and an iconic pop star playing central roles add to the mythical quality of the story.

In 1982, Jean-Michel Basquiat was invited to Los Angeles by gallery owner Larry Gagosian to work on new paintings for an upcoming exhibition. The 21-year-old artist with Hollywood good looks and charisma to match had recently become the hottest thing in the art world, ‘discovered’ the previous year in New York by curator Diego Cortez.

Basquiat accompanied the trip with his girlfriend, Madonna – yes, that Madonna – along with other street artist friends from New York Rammelzee and Fab 5 Freddy– yes, this Fab 5 Freddy.

While in Los Angeles, according to the story, Basquiat was introduced to Thaddee Mumford via Madonna and an assistant from Mumford. Mumford was a fellow Brooklynite and successful African American in a white-dominated profession. Mumford had won an Emmy for his writing on the PBS show “The Electric Company” and was working on the final season of “M*A*S*H” at the time of their meeting.

Mumford bought 25 paintings from Basquiat for $5,000, or about $50,000 in today’s money. Basquiat needed money to support his fierce drug addiction. According to Madonna and Gagosian, Basquiat had switched to heroin by the time he arrived in Los Angeles due to a deviated septum caused by his cocaine use.

Mumford disliked the paintings so they were left in his storage locker, never hung in his home, let alone shared in exhibitions or cataloged by historians as Basquiat became one of the most famous artists in the world.

And they were forgotten.

As Mumford grew older and his health deteriorated, he completely forgot about the storage locker. When he stopped paying, one of the great discoveries in art history turns into an episode of “Storage Wars.”

Defaulting on the locker after prolonged non-payment, the owner of the facility offered the contents of the unit in its entirety in plain sight at a public auction. These sales happen all the time and serve as the basis for the TV show. Experienced “scavengers” mainly sort waste in search of something of value to resell.

On the day Mumford’s locker was auctioned off, the contents included a cache of original Basquiat paintings worth around $200 million.

The winning bidder on Mumford’s storage locker cared no more for the paintings than their original owner and promptly sent them to a nearby dumpster. A chance phone call from the picker to a pal detailing the contents of the locker, including the paintings, many of which bear Basquiat’s perfectly legible signature in his unmistakable and exquisite handwriting, saved them.

The picker’s buddy was interested enough in the paintings to buy them. He is now one of two people who control ownership of the collection and has chosen to remain anonymous.

The discovery of unknown paintings by Jean-Michel Basquiat would be extremely significant. The fact that they were produced in 1982 adds considerably to their significance. 1982 was Basquiat’s “miracle” year and the year his most revered works were completed. Basquiat himself said that 1982 was the year he “makes the best paintings ever.”

In 2017, Untitled (1982), sold for $110.5 million at Sotheby’s, the highest price ever paid for an American artist at auction. Basquiat’s most expensive paintings all come from this period.

“1982 was Basquiat’s breakout year, but also his annual crescendo,” said Aaron H. DeGroft, director and CEO of the Orlando Museum of Art, during a press preview for “Heroes and Monsters: Jean-Michel Basquiat, the Thaddeus Mumford, Jr. Venice Collection”, an exhibition that presents the paintings to the public for the first time. “All these mega-paintings that sold for hundreds of millions of dollars, all painted in 1982. Some of them for this same show (Los Angeles Gagosian).”

The works exhibited in Orlando, however, were not made for the gallery.

“After 1982, Basquiat belonged to the art market, to dealers, to galleries, and he never painted for himself again,” says DeGroft. “You can say, ‘Well, every artist paints (for themselves).’ No, (after 1982) he painted for the market.Basquiat received 1.4 million dollars (to create works for his galleries).It’s like 10 million dollars today.

Before going any further, it is important to note that all 25 paintings in the Mumford Basquiat collection have been fully authenticated as authentic. Diego Cortez, who led the committee to authenticate Basquiat’s estate after the artist died aged 27 in 1988, viewed all of the group’s artwork before his death in 2021, approving them all as legitimate . Just as Basquiat’s prominent historian Jordana Saggese. Just like the esteemed forensic document examiner and handwriting expert Jim Blanco. Not everyone, however, is so sure.

The paintings are rich with the famous iconography of the artist. They feature the Basquiat crown, his “SAMO” tag, text, scratched-out text, hobo code, televisions, skulls, teeth, art historical references, allusions to athletes and his car accident childhood that left him hospitalized and indirectly launched his artistic career.

The paintings are even more notable, however, for their atypical character to Basquiat.

“They’re saturated with color, that’s not a word you hear Basquiat using,” says DeGroft. “These things are pictorial, another word you don’t hear to describe Jean-Michel Basquiat. They are works of art like no other in Basquiat’s career. These are arguably some of his best works of all time.

Even their production was special.

And they’re all painted on cardboard, a tribute to the artist’s time living in a cardboard box in New York’s Tompkin’s Square Park.

“Because they’re not on canvas, does that make them any less?” DeGroft asks rhetorically. “No, I’m saying it makes them more, actually.” Cartooning was near and dear to Basquiat; you can get cardboard for free at Ralph’s, the famous grocery chain (in Southern California).”

“Every painting (in the exhibition) is a self-portrait,” DeGroft said. “Each is autobiographical.”

The premiere of this exhibit makes a bold statement about DeGroft’s vision for the Orlando Museum of Art, which he declares as establishing “a world-class art museum in a global city.” The realization of this historic exhibition in a little over a year of work demonstrates that he is serious about it.

Works by Basquiat in museum collections are extremely rare. His star rose so quickly that by the time museums realized he was the go-to artist of his generation and an icon of contemporary art, the prices for his works were far too high for them. The vast majority of his paintings remain hidden from public view in private collections.

Which makes “Heroes & Monsters” more of an event than an art exhibition. A presentation that will be appreciated by the whole nation, if not the world.

“I invite (the guests) to go and enjoy it; I don’t know if enjoy is exactly the right word, but experiment (the paintings) because it’s a unique opportunity and we’re very proud to be able to bring our community in,” DeGroft said.

Designed by Jeff Thompson, former landscape architect of nearby Walt Disney World, the garden blooms with a canopy of nearly 300 hand-selected palms from six species and a coordinated orchestra of multi-colored lighting elements and special nocturnal flowers.

Inside, guests are treated to 500 works of art, many created exclusively for the hotel, as well as world-class interior design. Look closely for Jeff Koons’ balloon dogs in the hotel lounge lobby.