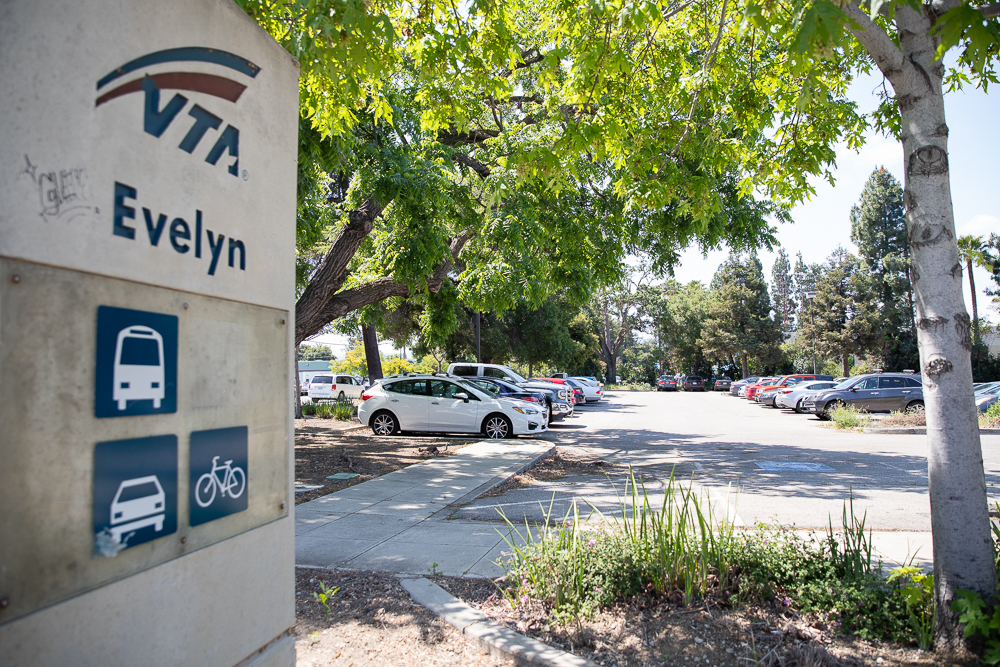 A former Valley Transportation Authority (VTA) parking lot currently serving homeless residents in Mountain View could soon be replaced with as many as 220 affordable apartments, as city officials seek to build dense housing for low-income residents. income on the property.

The city currently leases and plans to purchase the parking lot at 87 E. Evelyn Ave., with the goal of converting the 2.1-acre site into housing. The location is currently one of three city-operated secure parking sites, allowing homeless residents living in vehicles to park their cars and RVs at the site.

The secure parking site can accommodate up to 30 oversized vehicles and up to 21 passenger vehicles, making it an important part of the program, but it was always designed to be temporary. Now the city is looking to take possession of the land, for a purchase price of around $13 million, and build between 160 and 220 units in a five- to eight-story building.

Mountain View City Council outlined its priorities for the future housing project at its May 10 meeting, developing a framework to give potential developers an idea of ​​what the project should look like. Council members largely agreed that the accommodations should be dense and would be open to going beyond the height limits recommended by staff. Councilwoman Alison Hicks said some nonprofit developers find it possible to build mid-rise buildings of seven stories and above, and the site’s location – in an industrial neighborhood away from single-family homes – makes it an attractive location. for taller buildings.

The council also agreed to maximize the number of units subject to the city’s work preference, meaning those who live and work in Mountain View will have priority access to coveted affordable units. The plan must include units with a wide range of income eligibility requirements ranging from extremely low-income to middle-income households.

In March, nonprofit Charities Housing announced it was buying two properties along Evelyn Avenue for affordable housing, both of which form a triangle-shaped lot just off the VTA parking lot. . The charities are looking to build about 160 units, leveraging cash from Santa Clara County’s Measure A bond to pay for construction.

City council members agreed that the two projects should be strongly coordinated, potentially even under the same planning process, and that any contract with a developer to build on the city-owned land should require collaboration with Charities Housing. . However, Mountain View must go through a bidding process and cannot simply award a contract to charities to do a combined development, according to city legal staff.

The council was split on how much parking to include and whether to have defined parking requirements. Hicks said the developers’ initial application should not have minimum requirements and the number of spaces should be based on future traffic demand management (TDM) measures and careful consideration of parking demand more low typical of affordable housing projects.

But Councilwoman Lisa Matichak warned that parking on nearby streets like Pioneer Way is already limited and nearby businesses are already concerned about indirect parking which could deter customers. She said she was wary of standards that imply less than one parking space per unit.

“If someone comes up with less than one, I’d like a parking study,” she said. “Without that, I think there needs to be at least one per unit in addition to a robust TDM program.”

Councilor Margaret Abe-Koga took a similar stance and said it was unrealistic to assume people would walk and cycle to neighborhood amenities or Landels Primary School.

But increasing parking requirements to at least one space per unit also failed to win majority support, with the council falling back on a staff recommendation to build between 0.5 and 0.75 parking spaces. per unit.

As it stands, the city is still using the VTA site under a long-term lease with VTA, which stipulates that secure parking operations must cease by the end of 2024. But once the city buys and owns the parking lot, it can extend this indefinitely until construction of affordable housing begins. City officials told council members they would take steps to ensure those living in VTA field vehicles will have an “appropriate pathway” to affordable housing, in a bid to avoid the travel once the secure car park is closed.