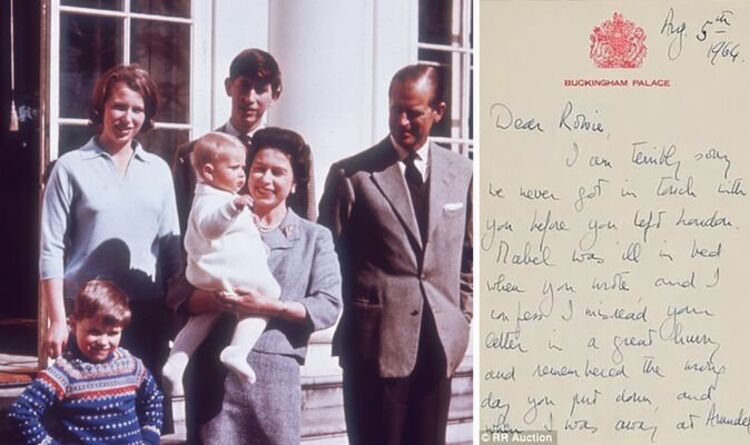 Prince Charles, 73, is increasingly having to step in to support his mother, who turns 96 next week, ahead of her future role as king. The Queen’s eldest son represented the monarch at Thursday’s holy service, at St George’s Chapel in Windsor Castle.

It was the first time the Queen had missed the traditional coin-giving ceremony in 52 years.

She will also not attend the Easter Sunday service at Windsor Castle this weekend.

The Queen has been forced to cancel several engagements in recent months due to her health and mobility issues.

A rare letter from the Queen to her midwife after the birth of her fourth child, Prince Edward, underlines the Queen’s gratitude for his good health.

It details the state of health of a 16-year-old Charles at the time.

Written from Eastbourne, East Sussex, the letter to his “Rowie” midwife, Helen Rowe, reads: “I am terribly sorry that we never contacted you before you left London.

“The baby is wonderful – good as gold, trying to sit up and weighing 15lbs 12!

“He smiles and laughs at everyone, and makes everyone happy! Charles, I’m grateful to say, is doing better but is still very fragile.

“Hopefully we’ll see you when we return in October.”

Charles tested positive for COVID-19 for the second time in February and was “deeply disappointed” to have to cancel planned events to self-isolate.

The heir to the throne previously contracted the virus in March 2020 and spent seven days in self-isolation at his Birkhall home in Scotland.

At the time, he said he “ran away quite lightly” suffering from a mild form of the virus with loss of taste and smell.

The Queen tested positive for COVID-19 days after Charles in February 2022.

Buckingham Palace described her as suffering from “mild cold symptoms”, but she continued her duties.

The monarch discussed her COVID-19 experience with a former patient whose brother and father died from the virus.

She revealed during the virtual visit to the Royal Hospital in London last week that she was ‘very tired and exhausted’ from the virus.

Royal biographer Robert Hardman told GB News last month that “mobility is sort of an issue now” for the monarch.

But he added: “Those who are very close to her tell me she’s in really good spirits, you know – absolutely as sharp as ever.”