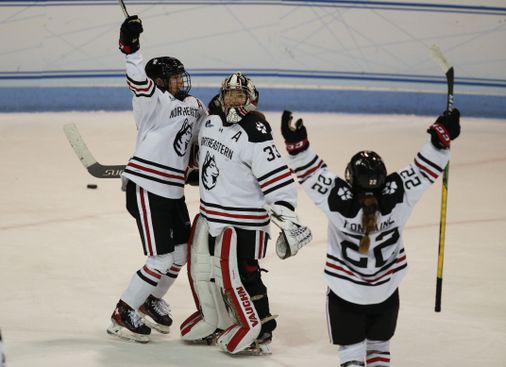 Even though Northeastern is ranked among the top women’s hockey teams in the country and has dominated Hockey East for the past five years, they are sometimes underestimated by the rest of the women’s hockey community.

After Saturday’s NCAA quarterfinal game against Wisconsin, the team that defeated them in overtime of the national championship game last season, the Huskies hope the doubters have a change of heart.

Thanks to 36 saves from Aerin Frankel, the nation’s top goaltender, and goals from four scorers, No. 3 Northeastern beat the No. 5 Badgers 4-2 on Saturday at Matthews Arena. The win sends the Huskies to the Frozen Four for the second straight season.

“We don’t get a lot of respect and I think we earned it today,” Northeastern coach Dave Flint said. “People think it’s all WCHA, but there are a lot of other teams as well.”

Flint and his team planned Wisconsin well, and it shows. Knowing that the Badgers’ trademark is their speed, but their challenge lately has been their small bench, Flint limited the Huskies’ front-row minutes early in the game. Instead, Northeastern brought in Katy Knoll and Skylar Irving to pace their first-period offense and saved their leaders for late in the game when Wisconsin faded. The plan worked.

Get sports titlesThe latest sports headlines from The Globe delivered to your inbox every morning.

Knoll capitalized when a checking penalty gave Northeastern (31-4-2) an early power-play opportunity five minutes into the game. She rebounded past Badgers goaltender Kennedy Blair to give the Huskies a 1-0 lead.

The relentless Wisconsin (26-8-4) didn’t hold back, crushing Frankel until Milton native Casey O’Brien picked up a pass from Makenna Webster and scored to tie the game, 1-1.

Wisconsin thought a power-play opportunity late in the first would give them the advantage, but the Huskies threw the Badgers for a loop, changing their shorthanded staff and pressing unexpectedly.

“[Flint] was well prepared,” Wisconsin coach Mark Johnson said. “He turned things around and gave us adjustments on that first power play.”

After surviving this penalty kill, Knoll and Irving struck again. Knoll sent a pass sailing from the face-off circle to the right of Wisconsin’s net and Irving tipped into the net, giving Northeastern the lead with five seconds left before intermission.

Goaltenders Frankel and Blair were called upon early and often in the second period, as Wisconsin threw everything they had at the Huskies and Northeastern unleashed their front line of Maureen Murphy, Chloe Aurard and Alina Mueller.

Eventually, Northeastern moved into the Badgers’ zone, firing Blair at will. Murphy scored on a rebound from Aurard to put the Huskies up, 3-1.

Wisconsin tried to catch up early in the third. After a cross call on Northeastern two minutes into the frame, Brette Pettet redirected a Sophie Shirley shot past Frankel to bring the Badgers within one.

After withstanding three chances from Wisconsin, Northeastern found themselves on the power play for the fourth time, and this time a slapshot from Mueller found the back of the net to cushion Northeastern’s lead.

With two minutes remaining, Wisconsin pulled Blair for the extra forward. Badgers spark plug Daryl Watts led several last-minute offers to score. But Frankel didn’t even have to make the saves, as his defense blocked shots over time.

“It was six against five, but I didn’t even see it,” Frankel said. “They were blocking it, putting their bodies at risk.”

“Like I told them in the locker room, the road is tough, but when we play our best, we can take on anyone,” Flint said.