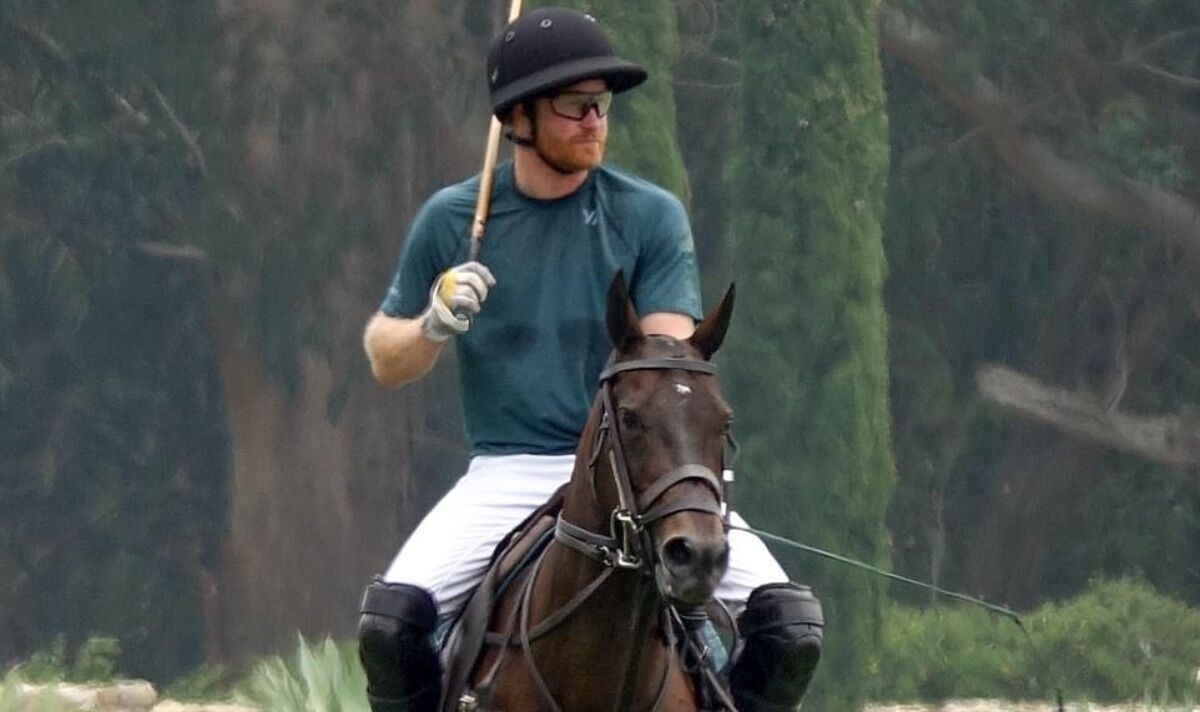 The Duke of Sussex enjoyed a game of polo after returning home to California with his family. Prince Harry, 37, played for his friend Nacho Figueras’ Los Padres team at the Cancha de Estrella Polo Club in Santa Barbara on Friday.

The Duke and Duchess of Sussex returned to Los Angeles on June 5 with their children Archie and Lilibet after spending the weekend in London to celebrate the Queen’s 70 years on the throne.

Prince Harry was seen wearing a green top, white trousers, riding boots and black knee pads as he enjoyed the Los Angeles heat, before mounting his brown horse and putting on his helmet and his goggles for another part of game.

Meghan was not present for Friday’s match, which Harry’s side lost 12-8 to Dundee II.

The couple only made one public appearance when they returned to the UK for the platinum jubilee, as they were reportedly told to keep a “low profile” during the four-day holiday.

It comes after royal experts claimed this week that Harry ‘must have gone home feeling very depressed for what he gave up’.

Over the weekend it emerged that the Duke and Duchess of Sussex had been relegated to second place at the service of thanksgiving at St Paul’s Cathedral.

Vanity Fair’s Katie Nicholl told True Royalty TV’s The Royal Beat that the couple weren’t at any other celebrations because “they didn’t have center stage seats.”

She added: “I honestly think it’s [because]…they knew they wouldn’t be number one. And why did they leave the royal family? They left because they weren’t in the front row. I think that’s why they weren’t at the other celebrations because they didn’t have center stage seats.”

Royal biographer and journalist Duncan Larcombe says the Platinum Jubilee celebrations will haunt Prince Harry for the rest of his life as he and his family have been relegated to minor roles and opted out of certain events.

He said: “These four days will haunt Prince Harry for the rest of his life. They [The Duke and Duchess of Sussex] were relegated to sit behind the Duke of Gloucester [at the Thanksgiving service].

“They did not participate in any visible way, shape or form in the flag parade… [Harry] will be furious at the way he and his family have been treated – if it was Prince William and the Royal Family who said ‘you don’t come to the royal box’ while other underage Royals who don’t work were at these events.”

It comes after biographer Angela Levin, who spent a year with Harry, claimed the prince would likely feel like he ‘owed an apology’ and was ‘largely ignored’ during the four-day celebration. .

DO NOT MISS :
Prince Harry and Meghan Markle ‘ran into a brick wall’ at Jubilee [COMMENT]
Kate and William ‘made no effort’ to bridge the gap with Harry [OPINION]
Meghan and Harry recover from ‘insensitive’ family reception [INSIGHT]

During the Trooping The Color ceremony, the Duke and Duchess watched the event alongside the Tindalls after being barred from the balcony at Buckingham Palace.

The couple moved to Los Angeles in March 2020 after stepping down as senior royals.

The Queen met their daughter Lilibet on Saturday June 4 as the couple hosted a picnic to mark Lilibet’s first birthday.

But Prince William and Kate were unable to attend the event due to previous commitments.

2022-06-11
Previous Post: World Cup 2026: Will Dallas be chosen as the host site?
Next Post: Nigeria’s delegation system is corrupt