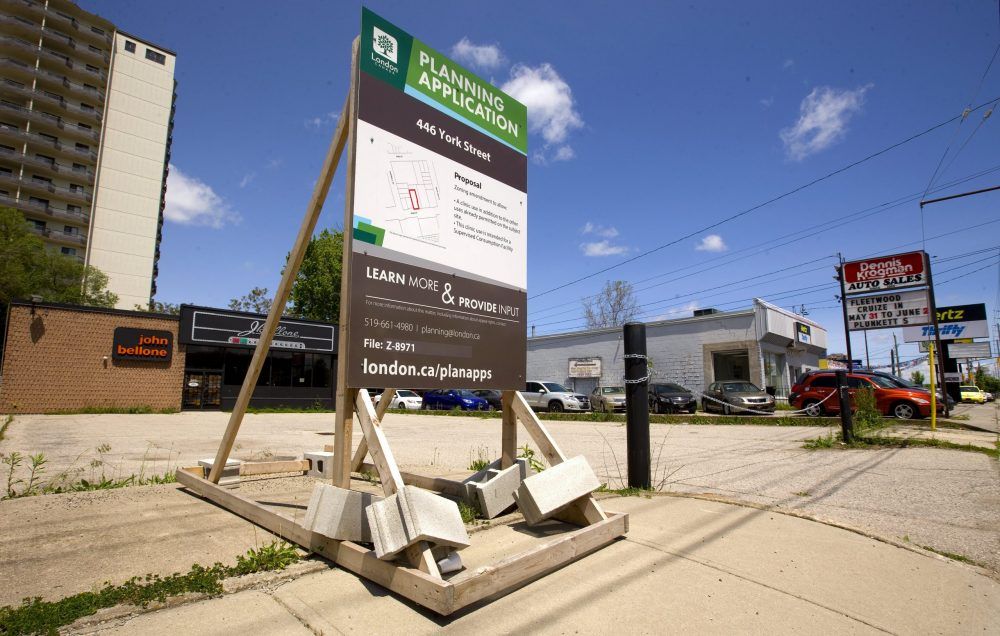 The Regional HIV/AIDS Connection has secured provincial funding to turn a former York Street music store into a supervised drug use site, a major step in a project that has taken years, the regional executive director said. ‘agency.

The funding will cover the cost of renovating the empty building at 446 York Street, across from the Men’s Mission, into a permanent supervised injection site in London.

“It was quite a long process. . . . In a few months, this project will kick off,” Regional HIV/AIDS Connection executive director Brian Lester said Friday.

“This is a big project and the ministry needed to be satisfied that we did our due diligence, dotted the i’s and dotted the t’s.

Regional HIV/AIDS Connection operates the Carepoint drug use site at 186 King Street, which will move to the York Street location when completed. King’s temporary site opened in February 2018 in response to a wave of fatal overdoses in the city.

The Regional HIV/AIDS Connection submitted floor plans for its York Street location to the Ontario Ministry of Health last summer to secure capital funding for the project.

The project will go out for tender early next week, Lester said, and will be open for at least 15 days. Once bids are received, the province will review the bids and send them back to the agency to choose the builder, Lester said.

“We can imagine it will easily take another month,” he said, adding that he feared that sending out the writs for the June provincial election – which would take place in early May at the latest – further slow down the process.

“Hopefully we get those rulings and clearances before that.”

Turning the former music store into a supervised drug use site will take about six to eight months of construction work, Lester said, but pandemic-related supply chain issues could extend the timeline.

“We could face some of these setbacks,” he said.

“There are still variables that are unpredictable. I thought we would be up and running (at York Street) by the end of 2022, but it wouldn’t surprise me if it was early 2023.”

It took years of successes and setbacks to bring the York Street facilities to this point.

Carepoint’s location at 186 King Street was never meant to be permanent. After nearly nine months of researching potential locations, the former music store at 446 York Street was rezoned to facilitate a drug use site by London City Council in December 2018.

The decision was appealed to the Local Planning Appeal Tribunal of Ontario by four neighbors opposed to the project. The group lost its appeal in November 2019, with a judge later rejecting opponents’ request to allow appeal of the court’s decision in July 2020.

The establishment of capital funding is a major step towards the realization of the York Street project.

“I’m still optimistic and hopeful we get there,” Lester said. “At the end of the day, we know we’ll have a great facility to serve people.”

Sign up to receive a curated collection of links and highlights from our award-winning news coverage, in-depth analysis and unrivaled weekday noon investigative features.

The next issue of LFP Noon News Roundup will soon be in your inbox.