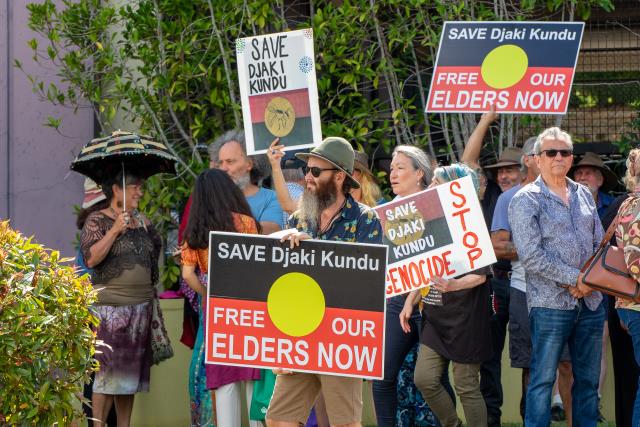 While the controversy surrounding a site east of Gympie known locally as the Gympie Pyramid in Rocky Ridge has been fairly constant over the years, the issues have really come to a head this year.

A dispute developed between a group of First Nations calling themselves the Sovereign Native Tribes of the Kabi First Nation State and the Queensland Department of Transport and Main Roads.

The site, which the indigenous group called Djaki Kundu, became an occupation in an attempt to prevent TMR from developing it as part of Section D of the Bruce Highway Cooroy upgrade in Curra.

Protesters moved to the area in January and in mid-February received a letter from TMR accusing them of trespassing and demanding they vacate the area within 48 hours.

A long occupation ensued as protesters battled TMR in courts and in state and federal political arenas.

In April, Queensland Senator and Australian Greens Deputy Co-Leader Larissa Waters visited the site and sided with the protesters, drawing national attention to the dispute.

Every now and then there were developments as appeal after appeal were filed and lost with various federal and state government departments and ministers.

Protesters were forcibly (but peacefully) evicted from the site in the early hours of October 16.

About 50 to 60 Queensland police were at the site and arrested six people and cordoned off the area to prevent the return of other protesters.

The action re-hit national headlines with SBS NITV News headlining their nightly bulletin with the deletion.

The move did not stop protesters who continued to appeal and file demands with other sectors of government, both state and federal, and to stage protests.

The protests continued even after bulldozers and other earthmovers began operating in the area in mid-November.