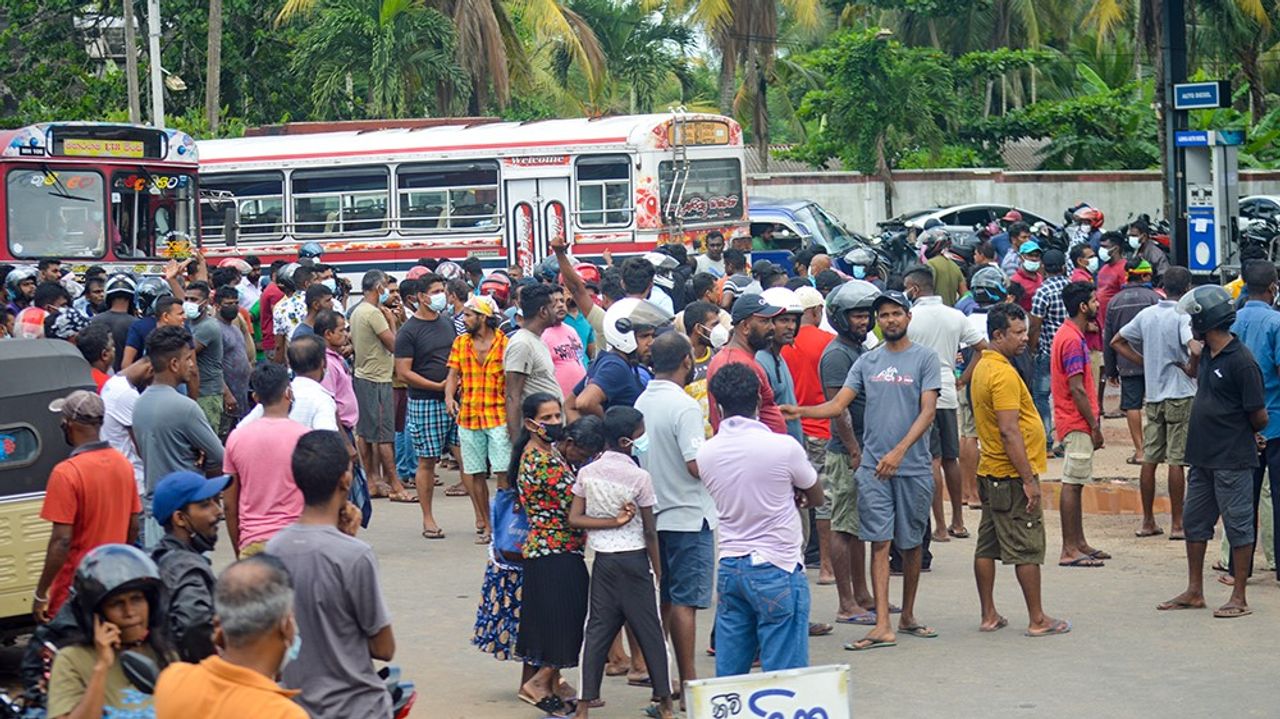 The Trade Union Coordination Center (TUCC) and the Collective of Trade Unions and Mass Organizations (TUMOC), two trade union groups in Sri Lanka, called for demonstrations on Wednesday and Thursday. They held up slogans such as “No to a government that defends thieves”, “Stop illegal arrests”, “Obey the demands of the people”, “Defeat Gotabhaya [Rajapakse]-Ranil [Wickremesinghe] conspiracy!”

Unions have called the protests in a bid to deflect growing anger among workers, young people and the poor over ever-rising prices and shortages of basic necessities. Angry protests are breaking out near fuel stations across the country every day over acute shortages of petrol, diesel and kerosene.

The anti-government movement intensified after thugs attacked anti-government protesters occupying Galle Face Green on May 9 demanding the resignation of President Gotabhaya Rajapakse and his government. The attack was orchestrated by Sri Lanka’s Podujana Peramuna (SLPP) of Rajapakse.

Facing mass opposition, Mahinda Rajapakse resigned as prime minister along with his cabinet, and United National Party (UNP) leader Ranil Wickremesinghe was installed in his place last week. Wickremesinghe, a former prime minister well known as pro-market and pro-US, will preside over the implementation of the austerity program dictated by the International Monetary Fund (IMF).

The unions did not organize the limited demonstrations this week to fight for the pressing needs of the workers, but rather to let off steam. The protests were characterized by demagogic denunciations from government union leaders and the new prime minister. None have blamed the capitalist system, which is in deep international crisis and is imposing ever heavier burdens on the working class.

Wasantha Samarasinghe, leader of the TUCC and president of the Inter-Company Employees Union, told protesters on Wednesday that the unions would continue to demand the prosecution of those responsible for the May 9 attack. He blamed the hardships facing workers on theft by those in power, not the profit system itself.

Ravi Kumudesh, president of the Federation of Health Professionals, promoted the illusion that Wickremesinghe could be pressured into making concessions to workers. Wickremesinghe, he said, had come to power through the struggle of the people and should not turn his back on him by making a deal with President Rajapakse.

Joseph Stalin, general secretary of the Ceylon Teachers’ Union, told a protest on Thursday that President Rajapakse was trying to retain power by appointing Wickremesinge prime minister. “We are continuing this struggle until the Gota-Ranil government returns home,” he said.

The unions are not asking for an end to the draconian state of emergency imposed after the May 6 general strike day. Already, the president has deployed the army in the streets to intimidate the population and impose a curfew.

Millions of workers took part in the May 6 strike. The rural and urban poor and small businesses rallied with the working class in a hartal. It followed a one-day mass general strike on 28 April.

Hundreds of thousands of workers also walked out indefinitely on May 10, after anti-government protesters were attacked by SLPP mobs. But that was under 24-hour curfew conditions that prevented workers from going to work anyway. Unions called off the strike on May 11, replacing it with limited demonstrations.

The massive mobilization of the workers not only shocked the government and the political establishment, but also the trade unions which called for the strike. The response of the trade union leaders has been to try to push back and demobilize the working class to prevent it from threatening the capitalist regime, to which they are all linked.

All of these unions have a long history of betraying workers’ struggles, including the 100-day teachers’ strike and the health workers’ strikes and protests last year.

Far from mitigating the social catastrophe facing the workers, Wickremesinghe is preparing to introduce austerity measures that will aggravate the difficulties. In an address to the nation on May 16, he warned that the coming months “will be the most difficult time of our lives and we will all have to make sacrifices”.

Addressing parliament on Wednesday, the Prime Minister asked all public sector employees in non-essential services not to report for two days due to fuel shortages. Schools have been closed since yesterday for the same reason. In parliament on Thursday, he cited the Food and Agriculture Organization of the United Nations and warned of impending food shortages and famine.

In a press conference the same day, Central Bank Governor Nandalal Werasinghe stressed that the prices of electricity, water and fuel should be increased.

Workers are unhappy with the role of unions as government and big business impose new burdens. Several workers spoke to WSWS reporters:

A worker from the ATG company in the Katunayake Free Trade Zone condemned the recent deployment of security forces by the government in all free trade zones.

“Wickremesinghe is the same as the old person, Mahinda Rajapakse. It’s hard to say any changes to ease the shortages, including of fuel,” he said and stressed that the unions had not brought a adequate support for workers’ struggles.

A nurse at Kandy General Hospital says his salary is not enough to handle the rising cost of living. “Our travel costs are increasing. The price of a loaf of bread went from 60 rupees to 170 rupees in a few months. This alone shows the unbearable increase in the cost of living,” she commented.

Union protests are “useless if we don’t have a program to defend our rights”, she continued. “Because the hartal and the May 6 strike were more successful than expected by the unions, they abandoned the [planned] General strike of May 11. I think that strengthened the position of the government.

A worker at an Electricity Commission substation in Chilaw said: “The CEB administration had suspended most overtime as part of its austerity measures. We depend on overtime to earn enough income to meet our needs.

“Unions called off recent strikes without consulting members, as they always do. A really serious discussion is needed to understand the real situation we are facing, but there is no such discussion.

Shyama, a primary school teacher, said: “In fact, we participated in the strikes not because the unions said so. I have never been a member of a union. Many of us went on strike because we believed our participation would contribute to the fight to end the hardships facing the masses in this country.

As the Socialist Equality Party (SEP) has demanded, it is imperative that workers form action committees, independent of the unions and all capitalist parties and their parasites. Such committees should be set up in workplaces, factories, plantations and working-class suburbs across the country.

By building a network of such action committees, Sri Lankan workers can organize a unified industrial and political struggle against the government and reach out to their class brothers and sisters in South Asia and around the world who are facing similar attacks on their social and democratic rights.

Such a struggle should be based on the struggle for a workers’ government to implement socialist policies to meet the needs of workers.

2022-05-21
Previous Post: Marijuana labeling system ‘not an effective or safe way’ to detail what’s inside products, study finds | app
Next Post: Know HIMARS, the PATRIOT air defense system that the United States could deliver to Ukraine