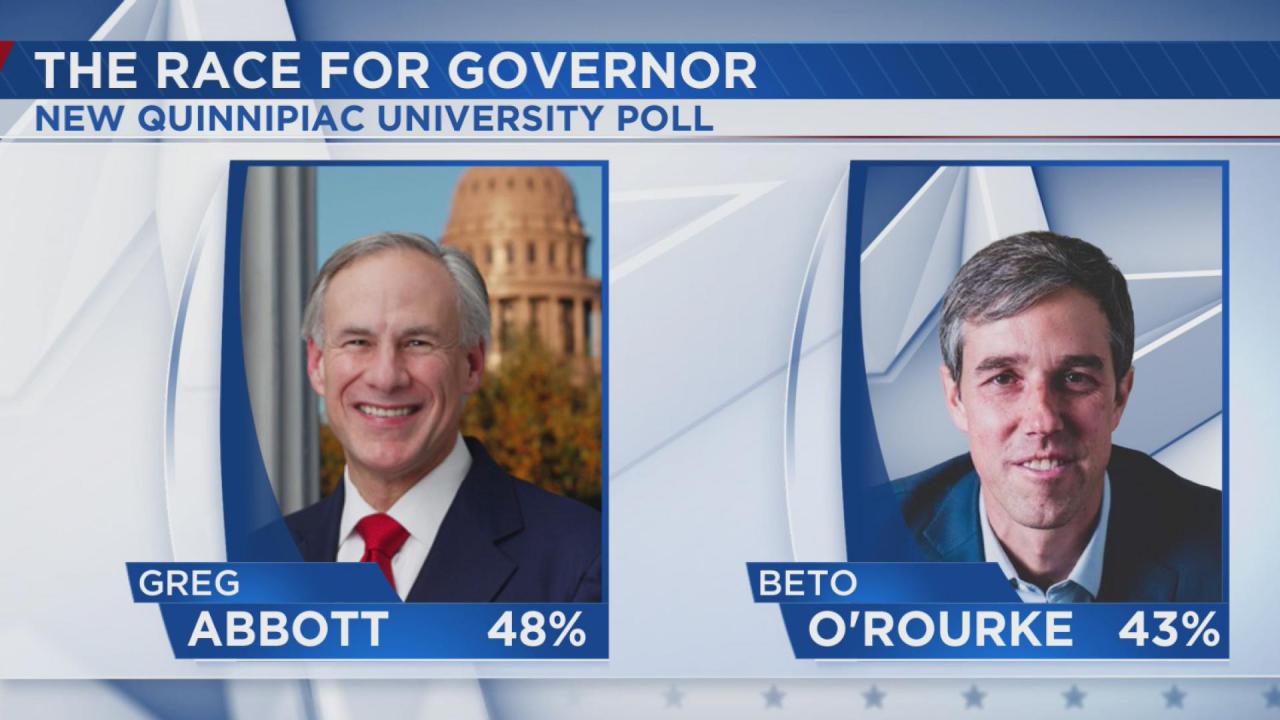 In Quinnipiac’s December race poll, Abbott was up 15 percentage points at 52% compared to O’Rourke at 37%.

Quinnipiac surveyed 1,257 registered voters in Texas between June 9 and June 13. This is the first major poll taken after the May 24 school shooting in Uvalde, when a gunman killed 19 children and two teachers.

The elementary school shooting was a priority for voters, who ranked gun policy the third most pressing issue facing Texans, behind the economy and the Texas-Mexico border in the first row.

In a Thursday interview with Nexstar, O’Rourke said that lined up with what he heard from voters on the campaign trail.

O’Rourke joined calls from other state Democrats criticizing the governor for not recalling lawmakers for a special legislative session.

“I would have called a special session literally the day after that shooting in Uvalde,” he said. “This current governor called special sessions to tackle transgender children, to make it harder for the state of Texas to vote to tell teachers in our public schools what version of history they are allowed to teach. Why in the world won’t [he] call a special session to save the lives of our children before they go back to school? »

Abbott resisted calls for a special session. He and other Republicans cited the fact that several state and federal investigations are still ongoing, saying they don’t want to create policy until they have all the facts.

When it comes to school safety, 61% of Texas parents surveyed said they were very or somewhat concerned about a shooting at their child’s school.

O’Rourke said if he were governor he would focus his efforts on expanding universal background checks, creating red flag and safe gun storage laws and expanding Medicaid for fully fund mental health care in Texas communities.

“The opportunity for us is to find out everything we can do to both protect the Second Amendment and protect the lives of our children,” he said. “Our children’s lives are on the ballot in November.”

The former congressman from El Paso rose to prominence during the 2020 presidential campaign for his “Hell yes” pledge to ban assault weapons. Since announcing his candidacy for governor, he has been less vocal about the policy, but renewed his calls for such a ban after the Uvalde tragedy. Abbott’s campaign accused O’Rourke of “flip-flopping” on political views.

2022-06-17
Previous Post: 6 times ‘Jeopardy!’ Champ Reveals The Worst Final Jeopardy Category He’s Faced
Next Post: Who owns the former Marks and Spencer site in Llandudno as part of a bid for conversion money