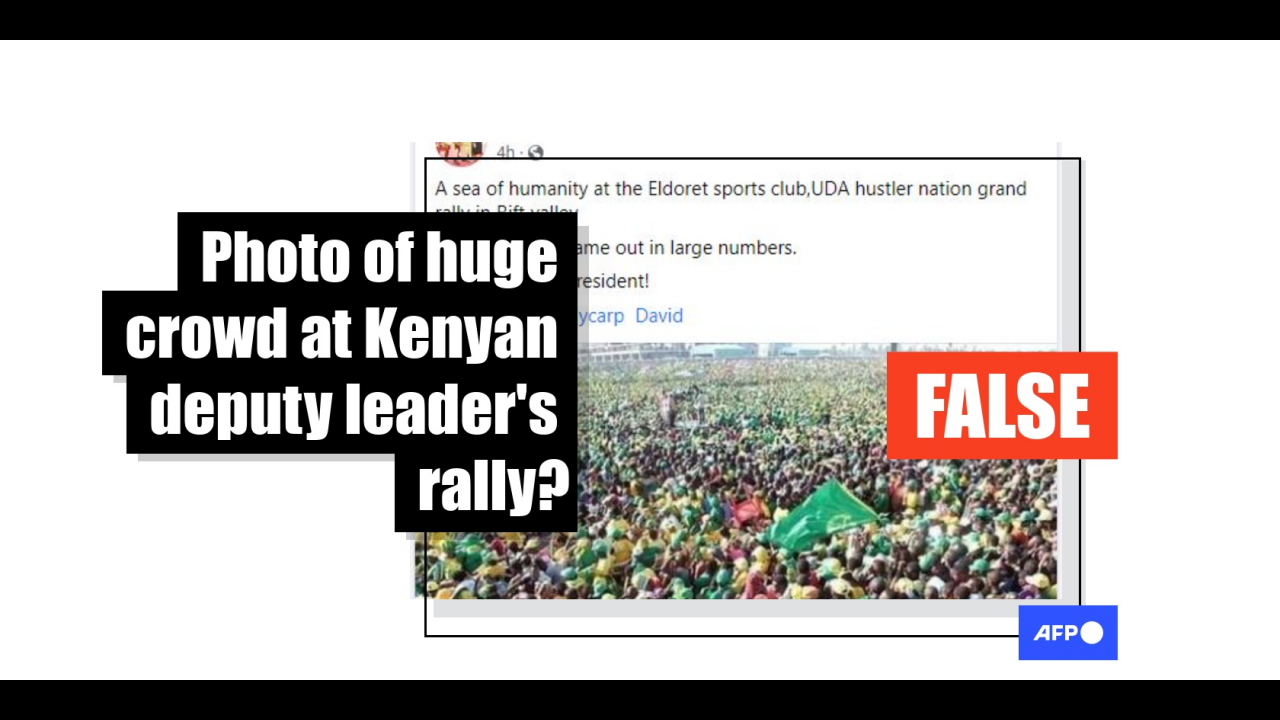 The photo is from 2015 and shows a political rally in Tanzania, not Kenya

Facebook posts with images of a political rally organized by Kenya’s Vice President William Ruto in his hometown of Eldoret on January 8, 2022, included an old, unrelated photo. The image of a huge crowd, which also circulated on Twitter, was captured in Tanzania by an AFP photographer in 2015 during a public rally organized by the ruling party Chama Cha Mapinduzi.

“A sea of ​​humanity at Eldoret Sports Club…. Eldoret residents came out in large numbers. Ruto is the 5th president,” a statement read. Facebook post published on January 6, 2022 on a page bearing the name of the Ruto United Democratic Alliance (UDA) political party.

The same image was shared on Facebook here and here.

On Twitter, the subject ‘Eldoret‘was in fashion and the out-of-context image was also shared (see here and here) next to the false statement.

Although he has not yet officially announced his candidacy, Ruto is expected to run in the national elections scheduled for August 9, 2022. The main opponents are his big rival, opposition leader Raila Odinga, who works closely with President Uhuru Kenyatta.

As Ruto’s rally on January 8 in Eldoret in the Rift Valley drew crowds, AFP Fact Check discovered that one of the images featured in the social media posts was unrelated to the ‘event.

A reverse image search shows that the image has been taken in October 2015 by AFP photographer Daniel Hayduk during a political rally in Tanzania organized by the ruling party Chama Cha Mapinduzi (CCM). At the time, the late Tanzanian President John Pombe Magufuli was campaigning for the presidency.

“Supporters attend a rally of the ruling Chama Cha Mapinduzi (CCM) party in Dar es Salaam, Tanzania on October 23, 2015, ahead of the country’s presidential elections on October 25, 2015,” the caption reads. Photo.

As Kenya prepares to elect its fifth president in August, there has been an increasing amount of polling-related misinformation online. AFP Fact Check debunked several allegations, including here, here and here.

Odinga, 77, announced in October that he would make his fifth presidential candidacy, ending months of suspense after a surprise truce with his former nemesis, President Kenyatta.

A pillar of Kenyan politics, the former Prime Minister remains very popular despite four defeats in the presidency in 1997, 2007, 2013 and 2017.

But the veteran politician will face a fierce fight against Ruto, 54, who was previously promised Kenyatta’s support for the top post in return for his support.

Ruto has positioned himself as a leader seeking to overturn the status quo and defend the “con artists” who are trying to make ends meet in a country ruled by “dynasties”.

The Kenyatta and Odinga families have dominated Kenyan politics since independence in 1963.

The previous elections were marred by violence and human rights abuses.