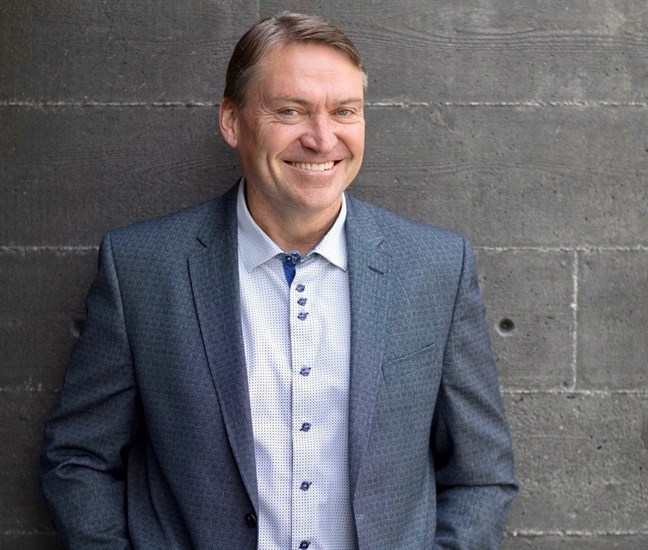 Former Kelowna Chamber of Commerce President Tom Dyas in an image from his campaign ad.

Kelowna’s new mayor said the “time” spent campaigning and learning about the city’s issues was the biggest change between his two mayoral campaigns, one of which led to his victory last night.

Tom Dyas crushed incumbent Mayor Colin Basran in last night’s mayoral election, October 15, with 21,110 votes to Basran’s 10,821, a stark change from when contenders faced off for mayor in 2018.

“People can’t wait to be heard…so overall it’s really good and I feel good that it happened and happy that we did it last night and I think the people of this town made a statement regarding the certainty of the path the election turned out to be,” Dyas said.

This will be Dyas’ first time in political office, having never been a councillor.

In 2018, Dyas collected just under 30% of the vote by losing to Basran. It was Dyas’ first time running for office. His victory ends Basran’s 11 years on the city council. He was first elected councilor in 2011 and then mayor in 2014. Basran did not respond to requests for comment.

The biggest difference to this campaign from his in 2018 was the weather, Dyas said. In 2018, he co-chaired the Memorial Cup bid just before entering the municipal race.

“It probably took four or five months of my time and right after that I jumped into the mayoralty process so I hadn’t had time to feel as comfortable with the issues. “, did he declare.

This time around, he spent more time talking to residents, which made him feel more comfortable talking about local issues.

“I just believe there was potentially no fulfillment of the desire of the people of the community that should have been fulfilled in their eyes,” he said of the former mayor. There has been a substantial increase in homelessness and being number one nationally with crime, which has residents worried.


READ MORE: Which Kelowna mayoral candidate is telling you the truth about crime and taxes?

The 2018 mayoral race also meant people became more aware of who he was, he said.

“I had perhaps assumed that because of my background of being involved in many aspects of the community as president of the Memorial Cup, involved in the chamber of commerce for 10 years, serving in many, many communities different, I knew enough people in the community but I understood this time that you needed to know more and that’s why we started walking door to door in mid-June,” he said. .

The 2018 election also helped him understand the process of running an election and described it as “basically building a business”, he said.

The first thing Dyas will do as mayor is talk to councilors to find out what’s important to them, he said.


To contact a reporter for this story, email Carli Berry or call 250-864-7494 or email the editor. You can also submit photos, videos or news tips to the newsroom and be entered to win a monthly prize draw.


We appreciate your comments and opinions on our stories, but play well. We will not censor or delete comments unless they contain off-topic statements or links, unnecessary vulgarity, false facts, spam or obviously fake profiles. If you have any concerns about what you see in the comments, email the editor in the link above.