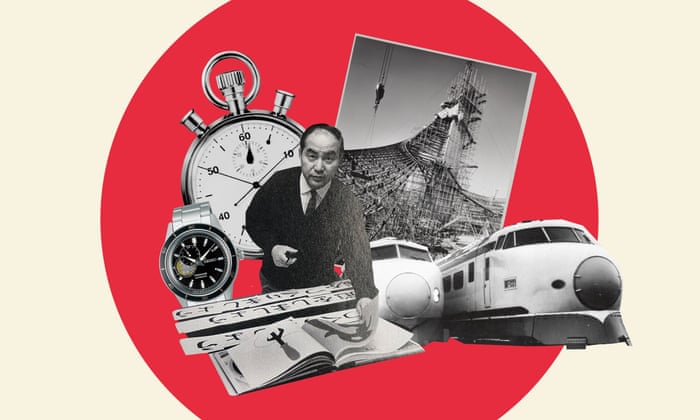 Tokyo 1964: Olympic designs that have stood the test of time | A time for Japan

The Olympics are a spectacle beloved the world over, and the 1964 Olympics were no exception. Broadcast live by satellite and with some color images for the first time, the Summer Olympics were the opportunity for Japan to reintroduce itself to the world. Rapid economic, social and technological developments had shaped the country’s post-WWII trajectory, and being the first country in Asia to host the Games was a great honor that spurred new innovations that endure today. From architecture and design to engineering and transportation, these feats set the global standard for years to come.

Recording time
Preparations for the Olympics started early and the challenges were great. Japanese watchmaker Seiko, for example, sent a research team to the 1960 Olympics in Rome to spot its competitors to be the official timekeeper for the Olympics. It was an ambitious endeavor: no watchmaker outside of Switzerland had ever held the title, and the team knew there was no time to waste.

The result of Seiko’s efforts was the world’s first fully electronic timing system capable of measuring events from the starting pistol to the finishing shot. These systems offered precision timing with a longer duration: the implementation of a “crystal chronometer” enabled Seiko timing instruments to reliably measure long-distance events and precipitated what is now known. under the name of quartz technology. In May 1963, the offer was accepted: the International Olympic Committee accepted Seiko as the first official timekeeper for the competition outside Switzerland.

On the back of the crystal chronometer, Seiko also produced Japan’s first wristwatch to include a built-in chronometer function, with a precision that set the standard for years to come. Known as the Crown Chronograph, the legacy of this model continues today: the Seiko Presage Style60s series is inspired by the original 1964 timepiece, creating a modern watch with a vintage touch. The signature box-shaped glass of the Crown Chronograph is combined with new finishing techniques to complement both the dial and the outer indexes. Nylon Nato straps showcase the series’ historic heritage, and polished lugs add visual sharpness to contrast with the retro feel of the watch face.

Lasting legacy
Between the end of World War II and the Olympic ceremony in October 1964, Japan had established itself as a technological and economic power. Its cities were growing to contain a steadily growing population, and existing innovations accelerated before the Olympics. Many of these developments helped shape Japan’s current reputation, including sleek high-speed trains, a keen eye for design, and groundbreaking architecture. Marking the return of the Games to Tokyo this summer, Japan House in London recently honored this legacy with an exhibition curated by programming director Simon Wright titled Tokyo 1964: Designing Tomorrow.

“Japan looked pretty triumphant on this world stage when hosting the Games, it was a pretty amazing visual spectacle,” said Wright. It refers to the Yoyogi National Gymnasium, which was designed by Kenzō Tange and built in the early 1960s for swimming, diving and basketball events in 1964. The ribbed hanging roof was the first of its kind in the world and has become a distinct profile among the Tokyo skyline. An achievement of both design and manufacture, the Yoyogi National Gymnasium also inspired the Olympic Stadium in Munich and is still used for concerts, sports competitions and other live events.

At this summer’s Tokyo Olympics, the gymnasium hosted the handball competition, more than 50 years after it was built. “There is a legacy of sustainability in the architecture of the 1964 Games,” says Wright.

An expression of modernity
“Of course, Japan is famous for its high-speed rail network,” he adds. “In fact, the Shinkansen high-speed train was established in 1964 and first operated just 10 days before the opening ceremony of the Olympic Games.”

The results were astounding: the Hokkaido-Shinkansen route reduced the travel time between Tokyo and Osaka to four hours, two hours less than previous train trips between the two metropolises. The high-speed line was paired with a new monorail that transported overseas visitors between the airport and the city center, and highways ran through Tokyo to help visitors and locals get around the city. “There was a new expression of modernity through the transportation of passengers arriving at Haneda Airport to the center of town,” Wright says.

Time after time
The global impact of the 1964 Olympic Games is difficult to measure: they changed architecture, transport and even the Games themselves. “There was a design committee of young designers who would later become icons in Japan and abroad,” Wright said, noting that this was the first time that an international sporting event had a visual brand and a unified language. Knowing that many visitors to Tokyo would not know the language, the committee designed a series of pictograms for sports and facilities, some of which were showcased at the 2020 Olympic ceremony as a celebration of the legacy of the Games. from 1964.

The committee also selected a font as the official typeface for the visual branding, with clean lines and easy-to-read curves – a font we now know as Helvetica. “This is probably one of the first major uses of fonts internationally,” Wright notes. “Much of what we take for granted actually happened for the very first time in Tokyo in 1964.”