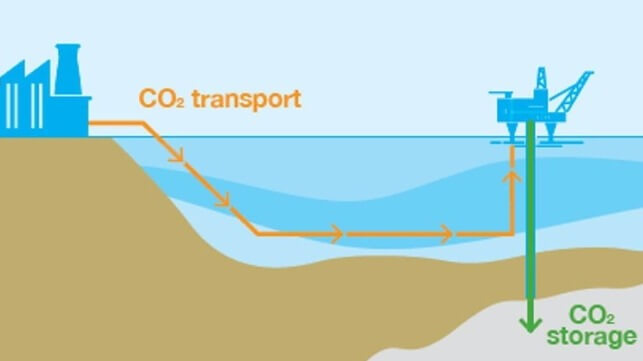 The UK is reporting a strong response for its first-ever carbon storage licensing round which offers up to 13 zones along the coast for emerging industry. The North Sea Transition Authority (NSTA) reports that it received 26 bids during the three-month process which ended last week and is likely to be the first of many auctions as it seeks to develop the industry to provide carbon storage.

The NSTA announced it was launching the carbon storage licensing round in June in response to unprecedented levels of interest from companies keen to enter the market. The agency listed areas off the coasts of Aberdeen, Teesside, Liverpool and Lincolnshire. The sites are in four cluster areas that they are looking to develop for the industry and while specific amounts have not been announced, the NSTA said it expects the new sites to contribute to the target of storing up to 30 million tonnes of CO2 per year by 2030. They estimated that up to 100 CO2 stores could be needed for the UK to reach net zero by 2050

When identifying sites, they said they look for a combination of attributes such as good geological conditions, proximity to existing infrastructure that could be repurposed, and links to industrial clusters that seek carbon storage. to help meet their decarbonization goals. In choosing the appropriate areas to make available for licensing, the NSTA considered issues such as co-location with offshore wind, environmental issues, potential overlaps with existing or future oil licenses and d other activities to ensure that each of the technologies can progress.

“We were very pleased with the quantity and quality of applications we received from a wide range of applicants,” said Nick Richardson, head of exploration and new ventures at NSTA. “The clear willingness of companies to get involved shows that the UK is well placed to become a global industry leader. Carbon storage can play an important role in reducing greenhouse gas emissions to the atmosphere.

There are currently six carbon storage licensees on the UK continental shelf which the NSTA says could meet up to a fifth of storage needs if they reached their maximum potential of 40 million tonnes per year in injection rates by the mid-2030s.

The agency said it would consider bids for new sites from a total of 19 companies. They plan to award the licenses in early 2023. Companies that receive the licenses will then need to obtain a lease from the Crown Estate or Crown Estate Scotland before they can move forward with a project. The NSTA expects the first CO2 injection to take place within four to six years. The captured CO2 would come from industrial processes and would then be transported, by ship or pipeline, to be stored in rocks deep under the seabed.