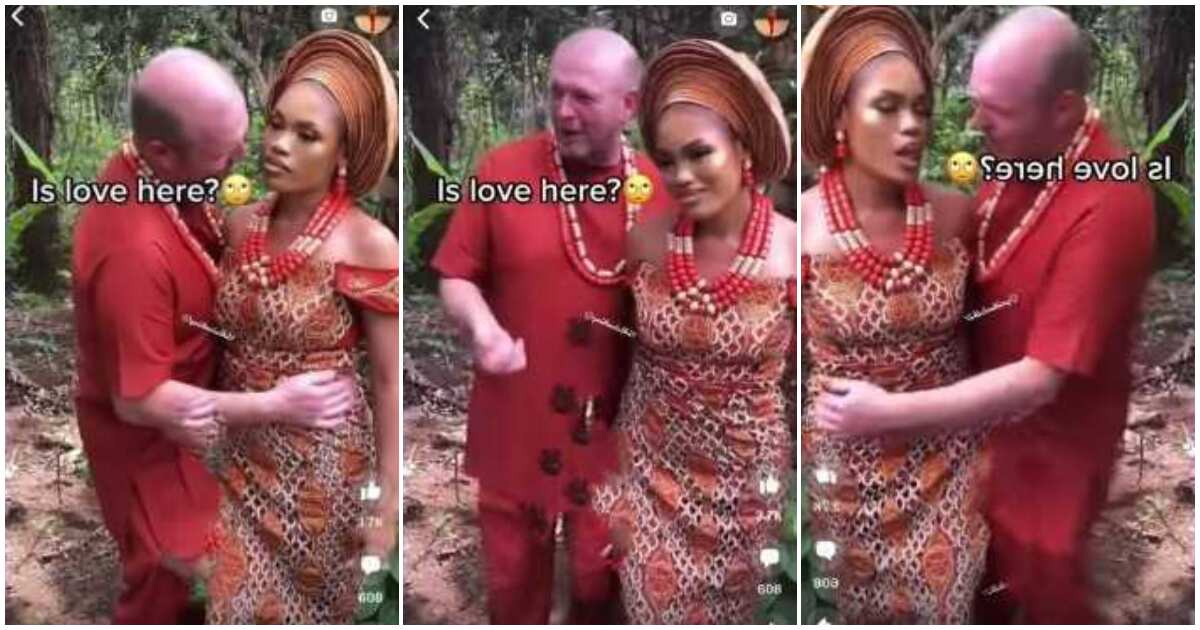 A short, awkward clip of an interracial wedding occasion has sparked massive reactions on social media.

The video was from a traditional wedding involving a Nigerian bride and her fiancé Oyinbo.

At the photographer’s request, the couple stood together for snaps, as seen in the video shared by @gossipmilltv on Instagram. The stone-faced lady avoided any contact with his lips. She went so far as to avoid him, stating that the photographer had not asked them to kiss.

The man stopped trying and remained calm as if the missed kiss incident had never happened.

Watch the video below:

“She doesn’t want him scattering his makeup na. How does this short video define the love they have. This sef on social media and jumps to the conclusion.”

“Oh my God, what’s wrong with people, should she allow him to eat the makeup to prove she loves him.”

“Obviously she doesn’t want to ruin her makeup, but I know people will see it in a different way.” Video shows Nigerian plus-size lady stone her ring and food for offering to her at restaurant, many react

“Omo the thing taya me oo, look how it stiffens its body. You love money, you have to follow everything to come.”

Meanwhile, Legit.ng previously reported that a shy bride caused a stir at her wedding by refusing to kiss the groom.

After being led by a man who appeared to be the pastor for the occasion, the groom wanted to kiss the lady but she continued to dodge him.

In the video shared on Instagram by @mufasatundeednut, the lady sported a faint smile suggesting that she was shy and refused to be moved by the chants of the guests who obviously wanted the lady to comply with the marital ritual.

The man after several unsuccessful attempts manages to gently rub his lips against hers.

2022-04-12
Previous Post: Modernized BC Bid site is open for registration and onboarding
Next Post: Lawmakers mull competing proposals on how to overhaul school funding system