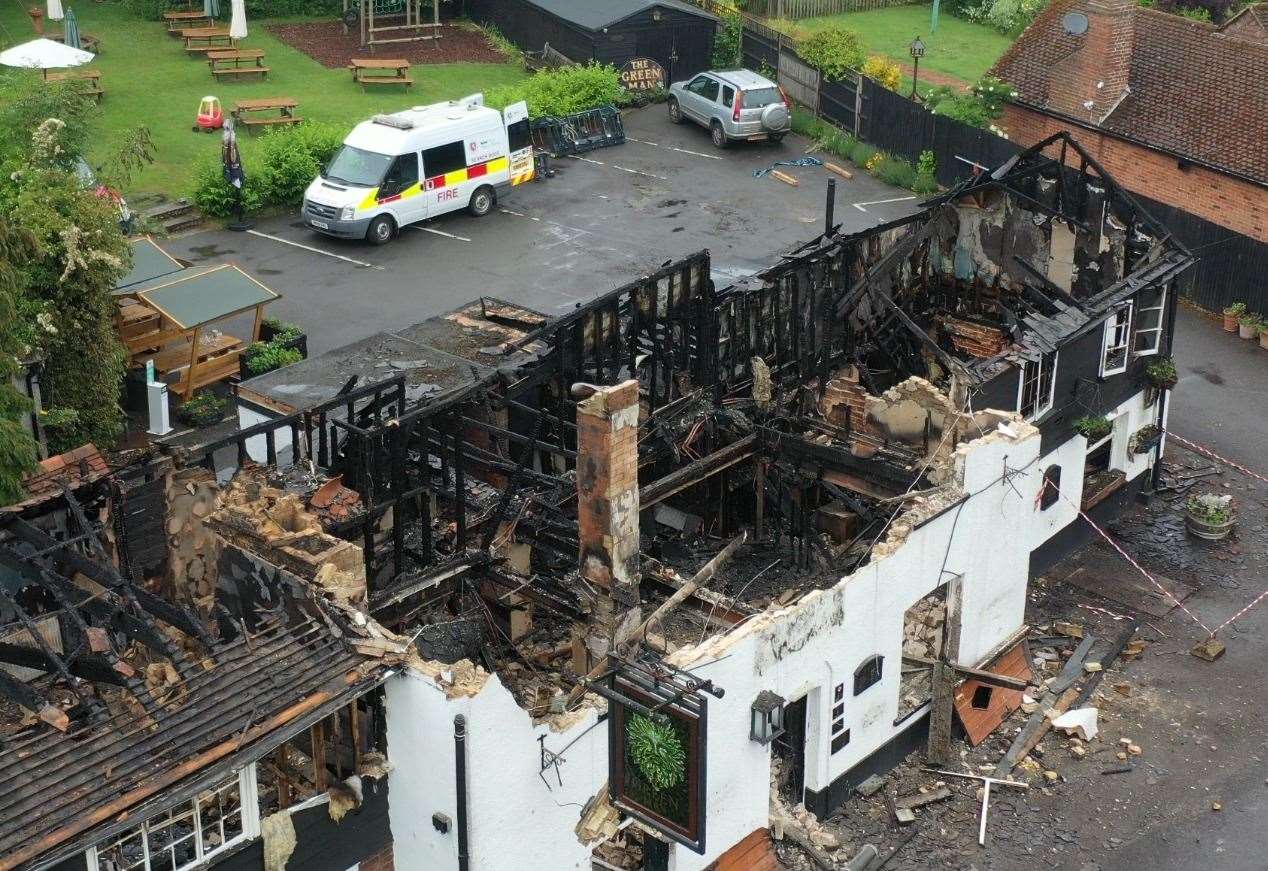 Villagers have vowed to ‘fight on’ and ‘take down’ the developers in their fight to restore and reopen a fire-ravaged country pub to its former glory after they failed to save the site.

A devastating fire engulfed the Green Man in Hodsoll Street last year after it was hit by a lightning bolt that ripped open its framework.

It had overlooked the green in the quiet hamlet between New Ash Green and Vigo for over 130 years and was described by villagers as the beating heart of the community.

At the height of the blaze in the early hours of June 16 last year, five fire engines battled the flames and water was drained and pumped from the swimming pool of a nearby house to help. The building had to be demolished a few weeks later.

Following, the community of 7,000 people came together to collect thousands of books to rebuild it and help devastated owner Alex Brooks, who ran the pub for more than four years with his wife Steph.

But a tricky post-pandemic pub landscape and the impending lease expiration meant that was no longer possible and Alex has since stepped down.

The now-flattened site, which was declared an asset of community value (ACV) towards the end of last year, was later put up for sale by pub group Stonegate.

Final bids have been received through September 21, including from The Green Man Recovery Group – a collective group of residents – who want to rebuild the historic boozer.

But after it was unofficially learned that their bid was unsuccessful, there are fears it could be sold to property developers.

The community presented a ‘significantly higher than market value offer’ backed by MPs, councilors and villagers, but were told a ‘much higher offer’ had now been accepted – although this has not not been officially confirmed.

Sally Samuels, a member of the Green Man Recovery Group, said: “It’s obviously being sold to a developer with the intention of building houses.

“The community is completely devastated and shocked that Stonegate is seeking to profit from the site.”

“It is obviously being sold to a developer with the intention of building houses.”

Over the past few weeks, she says villagers have seen various people walking around the site with an architect who informed them that their bid had been successful.

The group understands that the winning bid is “significantly more”.

Sally did not wish to disclose the financial value of her own bid for fear of hurting her if others failed.

But she added: ‘We are really upset because we made a good size offer. It was beyond the actual cost of the actual land the building was on.’

Sally says pubs close all the time in the area, but the band took inspiration from nearby success stories such as The Plow at Trottiscliffe, also a VCA.

The drunk was recently visited reappointed Security Minister and MP for Tonbridge and Malling, Tom Tugendhat.

In 2020, Enterprise Inns declared The Plow in Taylors Lane unviable and announced that it would put it up for sale for housing.

But 112 villagers were determined to prove them wrong and dug into their own pockets to raise the £570,000 needed to buy and renovate the building which is now owned by the Trottiscliffe Community Benefit Society.

And while they don’t have a building to work with, Sally thinks there’s a similar demand for the Green Man.

She added: “Even in this [economic] climate, it is possible to put something in place and make it work in service of the community while making a profit to make the one who runs it work. »

Despite their disappointment, the villagers have vowed to ‘fight on’ and ‘remove’ any developers seeking to encroach on the hamlet which is surrounded by Kent’s most concentrated cluster of listed buildings.

Sally said the effort to help shape their candidacy actually brought them closer together as they rallied in a common cause.

“The community will be outraged and will fight back as hard as they can,” she said. “We’re going to do what we can to weed out developers as they come forward.

“We’re going to make this as difficult as possible or at least make sure it’s done right and legitimately.”

She added, “A developer might look at it and think it’s a brownfield.

“We have to make them aware that it’s not like that. It’s a much more problematic site than it seems. We constantly nibble on little bits of information.”