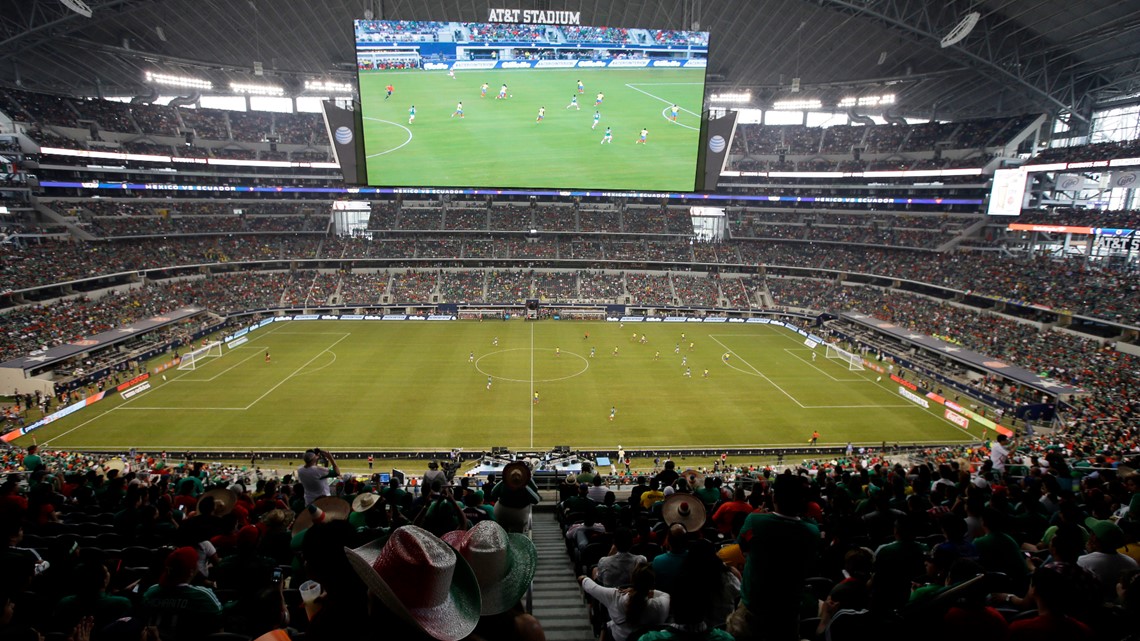 World Cup 2026: Will Dallas be chosen as the host site?

FIFA will choose the host venues for the 2026 World Cup on June 16. Here’s why city leaders say Dallas is a prime candidate to be a host region.

DALLAS — On June 16, FIFA will announce the host cities for the 2026 World Cup, which will be played in the United States, Canada and Mexico.

The World Cup 2026 will be the first with three co-hosts. FIFA selected the joint host bid in June 2018. Sixty games are to be played in the United States, including all from the quarter-finals. Canada and Mexico will host 10 matches each.

But will Dallas be selected as the host city? FC Dallas President Dan Hunt and Head Coach Nico Estévez will discuss Dallas’ chance to host FIFA World Cup matches on June 15, a day before the venue was announced host.

Hunt, Estévez and other executives on the Dallas bid committee crafted their pitch for DFW to be an integral part of the 2026 World Cup experience, which view online here.

AT&T Stadium serves as the marquee venue in Dallas for a World Cup bid, with a 92,300-seat capacity for World Cup matches. AT&T Stadium has become a mainstay of Mexican national team matches over the past few years, as well as world-famous clubs Chelsea, Barcelona and Club America.

But the installation space goes far beyond Jerry World.

The Dallas Bid Committee has highlighted numerous locations and sites in the area that would not only serve as excellent facilities for games, but also for practice facilities, including the Cotton Bowl in Fair Park, Toyota Stadium in Frisco, MoneyGram Soccer Park in Dallas, Westcott Field in Southern Methodist. University, Patriot Soccer Field at Dallas Baptist University, University of Texas at Dallas Soccer Complex, and Rail Road Park in Lewisville.

When the World Cup came to the United States in 1994, the Cotton Bowl hosted six games, including a memorable quarter-final between the Netherlands and Brazil, which is remembered as arguably the best game of the entire tournament. It was also recently announced that the Cotton Bowl will host FC Barcelona and Juventus in a match at the end of July.

The Dallas Bid Committee also designates Fair Park as a prime location for media and broadcast operations, as well as fan parties and entertainment. Other Sites in the DFW region highlighted by the committee in its location include: Sundance Square in Fort Worth, Arlington Entertainment District and Klyde Warren Park.

In addition to the vast venues, Dallas’ bid committee emphasizes the region’s centralized geographic location relative to other potential World Cup venues, as well as the two airports. The committee says the two airports make it easy for athletes, coaches, participants and others to get in and out of Dallas, while still being able to fly to most other locations.

“They can hop on a plane at a major airport or a private airport and get to any location in the bid very quickly,” Hunt said. told the Sports Business Journal. “They can even be in Canada in three and a half hours.

“The World Cup even surpasses the Super Bowl, but we are the fourth largest metropolitan area in the country, and we have one of the busiest and largest airports in the world,” said John Ackerman, vice president. Executive, Global Strategy and Development, DFW Airport. “We are well versed in hosting large groups like this. We know how to handle VIPs, and we know how to handle fan volume. »

Dallas Football History: A Passion for the Global Game

This part is multifaceted. You can start with the fact that one of the founding fathers of American football, Lamar Hunt, went to college at SMU and lived in Dallas. Hunt was an early investor in Major League Soccer (MLS), owning two teams: the Columbus Crew and the Kansas City Wizards (now Sporting Kansas City). In 2003 Hunt purchased a third team, the Dallas Burn (now FC Dallas). Lamar Hunt died on December 13, 2006 at Presbyterian Hospital in Dallas from complications related to prostate cancer. The US Open Cup, which dates back to 1913, has been renamed US Open Lamar Hunt Cup in 1999.

The National Football Hall of Fame is located in Frisco, at the south end of FC Dallas’ Toyota Stadium. Throughout the museum there are hundreds of football memorabilia, including FIFA Women’s World Cup trophies, league shirts and a wall of Hall of Fame inductees. USMNT legend and East Texas native Clint Dempsey was inducted this year.

Football culture is deeply rooted in North Texas, from the major leagues to the kids. Dallas is home to the second-largest youth soccer organization in the nation, according to the bid committee. The DFW area hosts many youth soccer tournaments and other events that typically attract hundreds of teams and thousands of young athletes and their families, including the Dallas Cup.

Whether Dallas is chosen or not, interest in the World Cup here in Texas will be very high. AT&T Stadium served as the host site for watch parties during the 2014 World Cup race.

All eyes were on the World Cup here in Texas, and the numbers prove it. Austin, Texas was the top U.S. market at the 2019 Women’s World Cup, according to figures from Nielsen Market Research. The interest in the Lone Star State is there. The opportunity to host just has to be granted. We will find out Thursday, June 16.

The Associated Press contributed to this report.

2022-06-11
Previous Post: Peaky Blinders and other movies and shows to watch on Netflix June 11-12, 2022
Next Post: Prince Harry returns to the polo fields for the first time since returning to the United States from the Queen’s Jubilee | royal | New